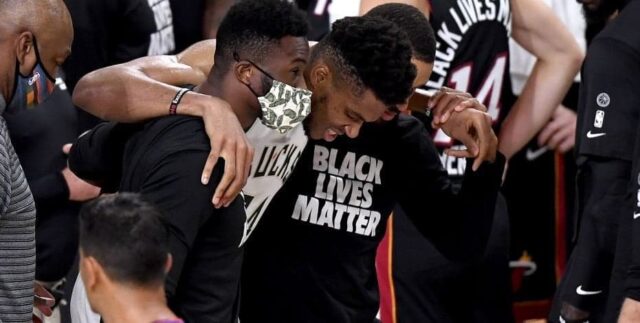 Lake Buena Vista, Fla — The Milwaukee Bucks had a tall task in front of them without forward Giannis Antetokounmpo sitting out the second half with a bad right ankle. Milwaukee found a way to keep their season alive on Sunday afternoon.

The Bucks rallied late to hold on in overtime to claim the 118-115 victory over the Miami Heat in Game 4 of their Eastern Conference semifinals series at Walt Disney. Milwaukee now trail 3-1 in the series.

Khris Middleton scored 36 points, including a big 3-pointer with 6.4 seconds left in overtime, and the Bucks starved off a sweep by beating the Heat.

”Khris is very unique,” Bucks coach Mike Budenholzer said. ”He’s got a way about him. He wanted to play. He asked to stay in the game.”

The Bucks was down by 12-points in the fourth, clawed their way back into the game and closed the final period on a 15-7 run — which they did after holding the Heat scoreless for more than five minutes of play. Milwaukee opened up the extra period on a 6-2 run and never looked back.

With 30 seconds left in the extra period, Miami guard Tyler Herro hit a clutch 3-pointer from downtown to bring them back within a point.

”Just keep fighting,” said Middleton, who also had eight rebounds and eight assists. ”That’s all my teammates did.”

Bam Adebayo scored 26 points, 12 rebounds and eight assists for the Heat. Duncan Robinson chipped in 20 points, Jae Crowder had 18 and Jimmy Butler and Goran Dragic each finished with 17.

”We didn’t deserve to win that game,” Butler said.

The Heat had an eight-point lead in the fourth quarter but shoddy defense allowed Milwaukee to score the next 12 points, and have  to come back Tuesday to finish the series off.

Antetokounmpo had 19 of Milwaukee’s first 30 points, shooting 8-for-10 from the floor. The Bucks fortune changed right in front of their eyes.

Antetokounmpo aggravated his sprained right ankle with 10:18 left in the second quarter, rolling on it – just as he did in Game 3 on Friday – as he tried to drive past Andre Iguodala. He fell to the court, grabbing the ankle and shouting in pain.