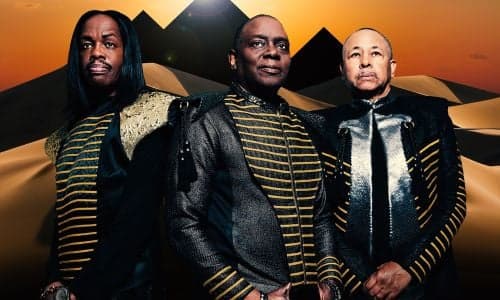 Performing at the prestigious Etess Arena at the Hard Rock Hotel & Casino in Atlantic City, the iconic group otherwise known as Earth, Wind, and Fire proved they still can bring down the house. Founded in 1969 in Chicago IL, their sensational combinations of funk, soul, disco and adult contemporary R & B along with their psychedelic cosmic flare, made them a massive success with a sound that continues to be that of no other.  Despite their challenges along the years with the passing of pioneer producer Charles Stepney, the genius behind the smash hit “Getaway” to the devastating loss of talented songwriter/lead vocalist Maurice White, the remaining original band members Philip Bailey, Verdine White, and Ralph Johnson preserve the group’s legacy.

The energy at the Etess Arena was phenomenal with fans reciting lyrics to their timeless classics “Reasons, Boogie Wonderland, Getaway and Groove Tonight.”  The tonality of the band was flawless as the sold-out venue had fans turning aisles into dance floors rocking to their worldwide tunes. Earth, Wind and Fire, this epochal ensemble, continuously, proves they possess the elements to reign supreme.

EWF’s next tour dates are scheduled for May 6th Palms Resort Casino in Las Vegas & May 10th Arizona Federal Theatre in Phoenix, Arizona.