College Park, MD—The Terps wanted to go for the weekend sweep and with Sean Burke on the mound, Maryland liked their chances.

Coming off of nine straight victories at College Park and two in a row against the Boilermakers, Maryland wanted to send a strong message to Purdue.

Burke pitched six masterful innings in a come back start for the redshirt sophomore. He was backed up by an strong offense that gave him all he needed to secure the game.

It culminated in a 7-2 victory for Maryland on Sunday, finalizing a sweep of the Boilermakers.

The Terps picked up its fifth straight win and 14th victory in its last 16 games. Maryland continues to play great baseball and moving upwards of the top Big Ten standings with two series remaining. But much of that was due to Burke’s pinpoint accuracy.

“Burke had a super efficient start for us,” coach Rob Vaughn said. “He was as efficient with his pitch count as he’s been all year.”

The Maryland right-hander found himself in an early jam.

Burke faced two Boilermaker runners in scoring position with one out in the first inning. Purdue struck first for the second day in a row. Ben Nisle came to the plate and took a 1-0 pitch smashed it to shortstop Ben Cowles. He was too deep in the hole to make a play, and the first run crossed the diamond.

The right-hander Burke had pitched only 5.2 innings since April 23. After throwing 117 pitches in that start against Iowa, Vaughn had limited Burke in order to rest his arm and it paid off.

He buckled down for five inning, holding Purdue to just three more hits and forcing weak contact throughout the remaining frames. 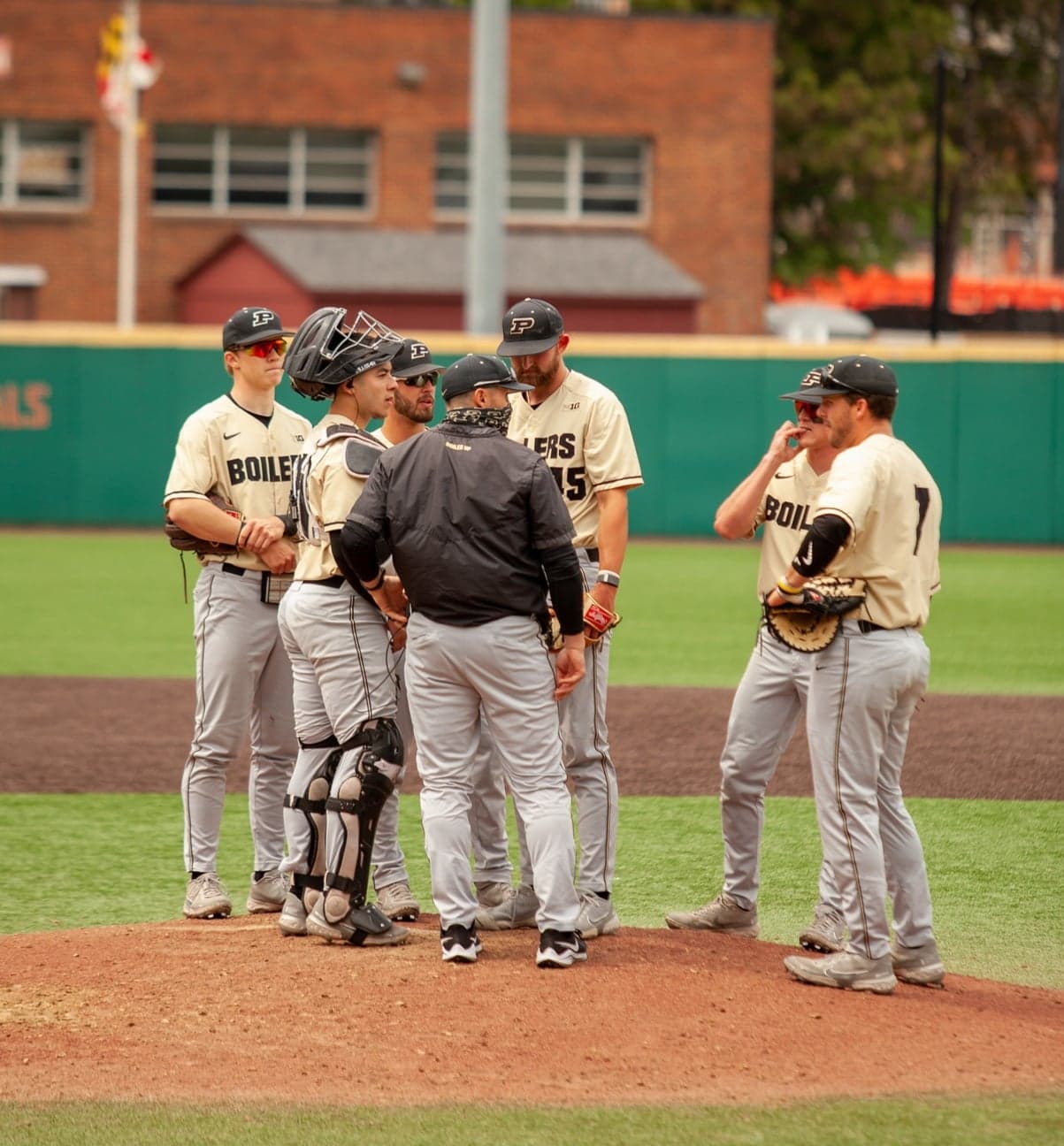 Maryland bounced right back in the bottom of the same inning. Second baseman Matt Shaw scorched a fastball from Boilermaker starter Cory Brooks to deep center field to put the Terapins on the board and tie the game up at one. Third baseman Tommy Gardiner followed up with a two-run triple to center and DH Luke Shliger added an opposite-field RBI single to put Maryland up 4-1.

After three innings of chipping away at the Boilermaker’s pen, the Terps finally broke through in the bottom of the fifth. Gardiner hit a double to left, advancing Matt Orlando to third and setting Maryland up and putting the game out of reach.

Right fielder Troy Schreffler followed up with a hard grounder down the third base line that skipped over Purdue third baseman Ryan Howe’s glove for a two-run double. Maryland finally forced reliever Jett Jackson out of the game and increased their lead to 6-1.

“We have a really good approach,”  Maryland Tommy Gardiner said. “We’re getting a lot of leadoff guys on and then what it really boils down to is we’re executing really well.”

Maryland took advantage of Burke’s superb outing. Shaw tallied his third hit of the afternoon on a single to center, and an RBI single from Matt Orlando increased the the Terps lead to 7-2.