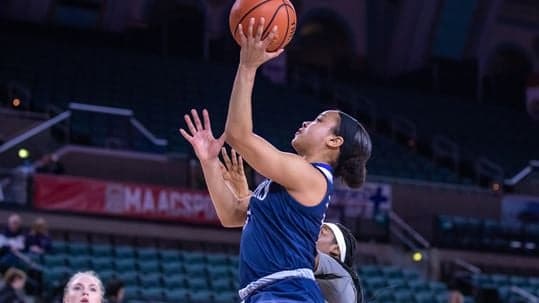 Atlantic City, N.J. – No. 8-seeded Niagara used their height advantage and a deep bench to defeat No. 9 Saint Peter’s for the third time this season, winning 64-53 victory in the first round of the Metro Atlantic Athletic Conference women’s basketball tournament Tuesday at Boardwalk Hall.

The Peacocks’ ninth-seed entrance is the team’s best finish in the regular season since 2011-12 and they were also tabbed ninth in the 10 team-field.

It was the 75th time that the Peacocks and Purple Eagles met in the opening round in the MAAC Championship.

Dagny Davidsdottir, a junior from Iceland, had a game-high 16 points, nine boards, and two blocks to lead Niagara (10-20), who will play No. 1 Rider in the quarterfinals at 1 p.m. Wednesday.

“What I know is that Niagara has a pretty deep team and Niagara is not going to be afraid,” Eagles coach Jada Pierce said. “We’re welcoming this challenge because the second time we played them wasn’t our best basketball. But I know these young ladies are really excited and there’s no better team to go up against than the top seed.”

Niagara had seven players listed on their roster at 5-10 or taller, compared to just two players for Saint Peter’s and use that advantage on the blocks outscoring the Peacocks 32-14 in the paint area.

“We have a much taller team, so we knew that we had a good chance of having an advantage in the paint,” Davidsdottir said. “We didn’t really emphasize on that in the beginning of the game. We started kind of slow and shot a lot of shots outside the paint and even outside the perimeter. Once we started feeding the post and also we started clearing the lane for the guards … to get to the basket, we started to find success.”

“We really pride ourselves on the defensive end,” Moore said. “As you’ve seen all year, we’ve been forcing a lot of turnovers, getting a lot of steals and trying to convert them on the other end.”