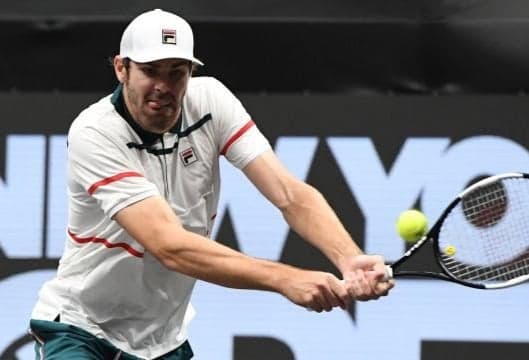 Uniondale, NY–Reilly Opelka was back in familiar territory at the New York Open trying to defend his championship from last year. defending champion of the New York Open. But it wouldn’t be easy going against 5’7 Yoshihito Nishioka who is lightning fast on the court.

Reilly Opelka earned his first win of the season Thursday, beating Yoshihito Nishioka 6-4, 6-4 with 20 aces at the New York Open in Uniondale, NY to move on to the quarterfinals.

“I thought I was pretty clean, pretty committed to playing the same style the whole match,” Opelka said. “I handled adversity well, came up with some big shots on break points.”

The third-seeded Opelka had a first-round bye, broke Nishioka’s serve in the final game of each set to earn a spot in the next round. He had dropped both matches on tour this season, blowing a two-set lead against Fabio Fognini in the Australian Open in the most recent one, and was on a five-match losing streak going back to October.

Nishioka earned some sportsmanship points by conceding a point to Opelka in the second game of the second set when he played a ball that bounced twice but originally not called by the chair umpire. Opelka protested and Nishioka conceded the point and Opelka gave the thumbs up.

“I know that umpire, he’s one of my favorites; he admits when he is wrong,” Opelka said. “He was like, ‘Did I miss that one? and I said ‘Yeah, pretty bad.’ He was smiling, then Yoshi said it was a double bounce.”

Opelka won his first career title last year in Uniondale. He advanced to face Jason Jung, who upset No. 7 seed Cameron Norrie 6-4, 6-4 to reach the quarterfinals for the second straight year.

Top-seeded John Isner was scheduled to play his first match of the tournament later Thursday against Jordan Thompson.