Home College Track and Field Rio Olympic champion Rollins banned for one year
Facebook
Twitter
Pinterest
WhatsApp
Rollins, who led home a USA 1-2-3 finish in Rio last summer (2016), was hit with the suspension for a year for failing to properly file whereabouts information for drug testing.

She appealed to a three-member panel of arbitrators after the US Anti-Doping Agency notified her of the potential violation.

According to information, two of the whereabouts failures occurred in September after Rollins won her Olympic gold.

Her 12-month suspension began on December 19, 2016.
Rollins wrote on social media: “I am sorry to anyone that I may have let down and to my sponser @nike.”

Rollins Statement: “Unfortunately I will not compete in the 2017 season, due to 3 missed tests with USADA. I was tested at least 16 times in 2016, but on these 3 times, and all for different reasons, I was not at my residence when USADA came to test me. I’ve always competed clean, and I am always happy to be tested to prove it. This is one of those difficult times in my career, especially after having such a great 2016 season – all I wanted to do was capitalize on that but God has other plans. I’m not sure what they may be, but U am sure there is a purpose – I believe that everything happens for a reason and that God wouldn’t put me in a situation that I cannot handle. As much as this hurts, I am sure that I will be stronger and better from it. I will continue to work to improve myself and get ready for next year. I won’t be defeated. Still blessed!” 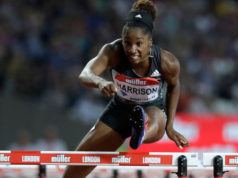