Lake Buena Vista, Fla. –When everything is on the line Boston seems to find a way to rise and step up to the challenge.

Boston reached into their gut and enamored their fans with Celtic Pride at the Wide World Sports Complex.

Tatum scored 31 points and 10 rebounds, Jaylen Brown chipped in 28 points and the Celtics shook off a slow first half to beat the Miami Heat 121-108 in Game 5 of the Eastern Conference finals to starve off elimination.

“Our deal was to come out and play, come out and compete, give it our best shot and I thought we played pretty well in the second half,”  Boston coach Brad Stevens said. “But we’re going to have to do it again and again because of the position we’re in.”

The Celtics outscored the Heat 70-50 in the second half and leaned on their young stars. Forward Tatum, 22, scored 17 of his game-high 31 points in the third quarter, and had 10 rebounds and six assists.

Daniel Theis had 15 points and 13 rebounds for Boston, who trailed by 12 points early but outscored Miami 41-25 in the third quarter and took the game over from there.

Jimmy Butler scored 17 points, Tyler Herro and Jae Crowder each had 14 and Bam Adebayo 13 for the Heat — which could not get anything to drop from beyond the arc.

“Boston played great in that second half,” Miami coach Erik Spoelstra said. “They deserved and earned what they got. We understand how tough it is to win in the playoffs. We did not compete hard enough defensively and we paid the price for that. But you do have to credit Boston. They played with great force.”

Coming out of the break Boston looked like a completely different team, the Celtics went on a 20-3 run in the third quarter to trim the lead from the Heat. Boston wouldn’t relinquish the lead thereafter, picking up the win to force a Game 6.

Goran Dragic had 23 points before fouling out with 4:27 left for the Heat, which got 20 from Duncan Robinson.

“It’s certainly not going to be easy,” Robinson said. “We’ve got to band together to do difficult things.”

Brown made back-to-back treys in the fourth quarter to turn an eight-point lead into a 103-89 margin with 8:05 left in regulation. He turned a blew a kiss to the Miami bench after the second of those 3’s, reminiscent of something Herro did during his 37-point outage in Game 4.

“It’s not going to be perfect,” Tatum said. “You just want to give yourself a chance.”

The opening minutes of the game didn’t go according to plan for the Celtics, they missed 11 of its first 12 shots, committed four turnovers in that stretch to make matters even worse, and dug themselves into a 17-5 hole early.

But they maintained their composure and play through it, even after shooting only 40% in the first half, the Celtics trailed 58-51 at the break — never leading, but stayed close enough to make a run.

Boston went on a 13-0 run over a three minute stretch to turn a nine-point deficit into a 64-60 lead, and the game changed quickly for the Celtics. A separate 7-0 burst followed, Walker connected on a 3-pointer with 4:26 left for a 77-67 edge — Boston’s first double-digit cushion of the night.

“In all sincerity, first time I’ve seen Celtics basketball in the last few games,” Stevens told his team during a time-out. 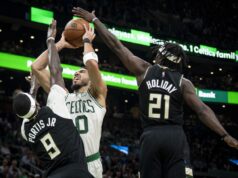 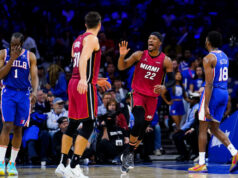