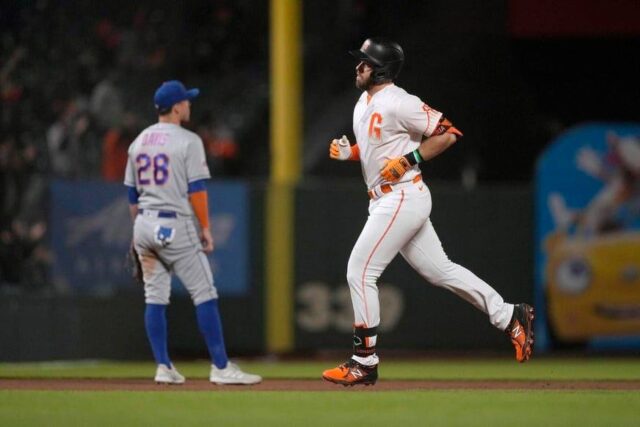 San Francisco —The Giants (78-42) hosted the New York Mets (59-60) at Oracle Park. The Giants maintained the best record in baseball and stand atop the National League thanks to home runs by Tommy LaStella and Evan Longoria.

San Francisco right Fielder Lamonte Wade led off the bottom of the 1st inning with a single. Second baseman LaStella put the Giants up 2 runs with a homer over the centerfield wall. The Giants’ lone homegrown pitcher Logan Webb brought his 1.53 ERA over the last 10 games into the evening. His four seam fastball and sinker have kept hitters off-balance throughout the season. Logan held true to form and kept the Mets scoreless through six innings.

Both pitchers continued to duel and stranded four runners in scoring position through the halfway mark of the contest.

Evan Longoria’s big bat extended San Francisco’s lead to 3-0 with a solo home run in the 6th. Mets’ Pete Alonso threatened the victory in the 7th with a 2-run bomb over the left-field wall to tighten the score 3-2. Logan was immediately replaced by reliever Jeff Garcia and received a standing ovation when he exited the field of dreams.

Entering the 9th, Mets’ second baseman Jeff McNeil led off the inning with a single. Garcia struck out the next batter. McNeil moved to second base on a fielder’s choice. With two outs and the tying run in scoring position, Giants’ reliever Dominic Leone took the mound. With the crowd standing and yelling, Leone struck out Kevin Pillar on four pitches for the save. The New York Mets will seek revenge tomorrow evening to close the series.