Houston, TX — The Washington Commanders cruised to its fifth win in its last six contests and improved to 6-5 with a 23-10 win over the Texans in Houston.

The Commanders rushed for 153 yards on 40 carries and limited the Texans to 148 total yards.

Taylor Heinicke threw for 191 yards, Kendall Fuller returned a pick for a touchdown on Houston’s second offensive play and was able to get the Commanders offense on track in the second quarter.

Heinicke, who started a fifth straight game for the injured Carso Wentz put together a stellar performance to help the Commanders build on last week’s victory over the Philadelphia Eagles.

Washington rushed for 153 yards on 40 carries and limited the Texans to 148 total yards.

The Commanders could only muster up 12 yards on six rushing attempts over its first three possessions, but was able to move the ball late in the first quarter. RB Brian Robinson Jr., who finished with 15 carries for 57 yards, had a 14-yard run to ignite a nine-play touchdown drive capped by wide receiver Curtis Samuel’s 10-yard run on an reverse.

Washington led 20-0 at halftime and they gaining momentum.

Davis Mills finished 19 for 33 for 169 yards with two interceptions for the Houston Texans (1-8-1) which lost their fifth straight and remained the NFL’s only one-win team.

Houston rookie Dameon Pierce, who entered the game ranked fifth in the NFL with 772 yards rushing, had 10 carries for a season-low 8 yards.

Antonio Gibson led Washington with 18 carries for 72 yards. The Commanders finished with more rushing yards (153) on 40 carries. Samuel and teammates Jahan Dotson and Terry McLaurin each received at least a carry as the Commanders found success attacking the Texans’ defense on the outside.

Mills scrambled for a 4-yard touchdown with about three minutes left to cut the lead to 23-10 but the Texans couldn’t do anything else after that.

Washington coach Ron Rivera and TE Logan Thomas wore Virginia T-shirts before the game to pay tribute to three of the school’s football players who were shot dead last weekend as they returned from a field trip. Rivera wore his T-shirt on the field during pre-game warmups and Thomas donned his as he arrived at the stadium to honor Lavel Davis Jr., D’Sean Perry and Devin Chandler. 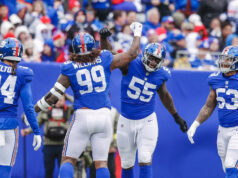 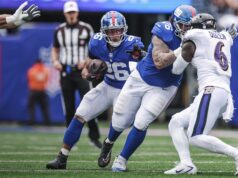