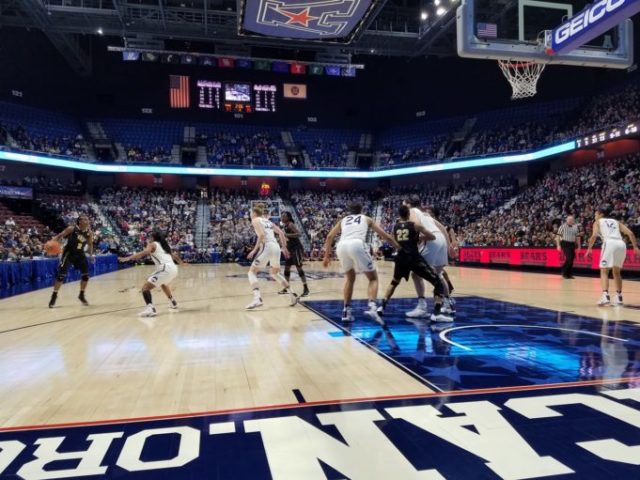 UNCASVILLE, Conn. –The Huskies was put the test early by UCF with their physical and aggressive play by the whole team. Somebody forgot to tell UCF they were playing the number # 1 team in the country.

UCF had a different approach for UConn, they wanted to speed up the game, guard the perimeter shots, and contest the ball screeners. It seemed the first half UCF had the secret formula to dethrone the defending national champions.

The Huskies was a step slower and missed a plethora of open looks in the first half for theNo. 1 team in the country. UCF ball pressure took UConn out of its comfort zone in thesemifinal matchup in the American Athletic Conference Tournament at the Mohegan Sun Arena. During that half UConn went long stretches without scoring any points.

Going into halftime UConn had a 12 points lead but they were still looking for answers to slow down UCF defense. Like all great teams they found a way to withstand the storm and figure it out. When halftime convened the Huskies had a new look and energy about them.

When UConn returned to the hardwood, they ball started to move more on offense, space in the paint appeared, and shots started to fall. Slowly and steadily, the Huskies extended its lead and wound up with win: 78-56 before a rowdy crowd of 6,491.

“ We didn’t play particular well tonight but we trust each other and we know we will get it done. UCF presented some challenges for us in the first half but we didn’t panic. At halftime we talked about it and made some adjustments and went from there. They couldn’t play at that pace they did in the first half. We just played into our strengths and good things started to happen.” Said UConn Napheesa Collier.

The Huskies and Bulls will meet for the third consecutive year in the conference tournament final. South Florida beat Temple 63-58 in the semi-final game.

After missing uncharacteristic 12 of 17 shots in the second period, the Huskies converted 11 of 17 in the third quarter. Katie-Lou Samuelson had a tough second period finding her shot.

“I thought the way we responded in the third quarter, the way we came out for the second half, really was a lot of fun for me to see. Our players generally respond to challenges. I thought they did a great job with that.” Said UConn Geno Auriemma.

UConn (31-0) has won 106 in a row and many games were over by the second period, thanks to their quickness and agility up and down the court. Against UCF (20-11), the Huskies squirted an 8-0 lead and put the game away early.

The Knights managed to play toe to toe with UConn, which led 18-14 after the first periodand 37-25 at halftime. But the Huskies left a lot of points on the court they couldn’t connect due to rushed shots.

The Huskies found the magic portion after the half and outscored UCF 24-12 in the third quarter, as Gabby Williams had seven points and Napheesa Collier chipped in six points.

Collier and Williams found the post game exerted themselves on the blocks with perimeter shots not falling and UCF intent on clogging the paint area Collier had 16 points and 12 rebounds while Williams had 16 points, nine rebounds, four assists and three block shots.

UConn got huge dividends from freshman Crystal Dangerfield who had 14 points and three assists in 26 minutes coming off the bench. Dangerfield wreck havoc with her dribble drive penetration against UCF ‘s match up zones and man-to-man defenses.

“ We was struggling in the first half and we had great looks in the first half. UCF had us playing defense longer then we are use to doing. They don’t pass the ball a lot so it is difficult for us to get turnovers. I was very fortunate they gave me a little space to take my shots. I felt good when my jumpers started to fall it also put my team at ease.” Said UConn Crystal Dangerfield.

“This time of the year, you’ve got to be able to win a lot of different ways.” Said UConn Geno Auriemma. 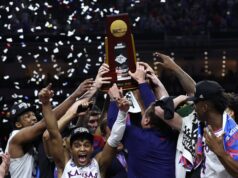 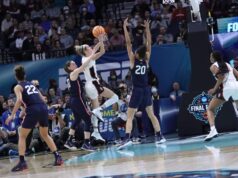