Flushing Meadows, NY— The 23,000-plus seats at Arthur Ashe Stadium were not entirely empty– while fans were not allowed to attend because of the crisis but one of the lucky ones to attend the event was Osaka’s boyfriend, rapper Cordae.

Osaka was put to the test early and prevailed. Trailing by a set and a break, No. 4 Naomi Osaka seed rallied for a exciting 1-6, 6-3, 6-3 victory over Victoria Azarenka to win the women’s singles title at the 2020 US Open on Saturday at Arthur Ashe Stadium.

Azarenka dominated the first set and looked like it would be smooth sailing for the rest of the day. She Controlled the middle of the court for  the first 30 minutes of the match, with her relentless baseline shots that kept Osaka off balance, it seemed though Azarenka would roll to her third Grand Slam singles title as she built a 6-1, 2-0 lead, with a game point on serve for 3-0.

“I think in the first set, I was so nervous, I wasn’t moving my feet. I felt like I was not playing—not that I expect myself to play 100 percent, but it would be nice if I could even play, like, 70 percent. I just felt like I was too much in my own head. Then in the second set, of course I was down early, which really didn’t help me out. I just thought to myself to be positive, don’t lose 6-1, 6-0, hopefully give her a slight run for her money. I just sort of ran with that line of thinking.

“I would say a really important game was definitely the game that I broke her in the third set. I’m glad that I did it earlier on because I felt like, later down the line, it would have gotten really tight for me.” Osaka said.

Osaka woke up and regained her composure and start to play her brand of tennis. Both players were making nerve-induced mistakes, but Osaka was playing with more confidence and energy and Azarenka felt it. Osaka rallied back to take four straight games in the second set to mount her comeback.

“I feel like two years ago, I maybe would have folded being down a set and a break,” Osaka said after the match, recalling the differences between Saturday’s win and her first in 2018. “But I think, all the matches that I played in between that time shaped me and made me or forced me to mature more. Especially all the matches that I’ve played here were very tough.

Osaka momentum continued well into the decider, as her groundstrokes continued to find the corners and her serve stayed on-point. The first to break serve in the final set, Osaka felt comfortable with an early 3-1 lead, and navigated her way out of a 0-40 deficit in what proved to be a crucial fifth game.

With nothing to lose, Azarenka garnered some late resistance. She saved a trio of break points herself in the sixth game, where losing any one of them would’ve seen her trail, 5-1. She later stopped Osaka a pair of game points that would have seen her lead 5-2. Instead, Azarenka turned the decider on its head and got back on serve, but got no closer from then on.

“The break, maybe in the beginning of the second set, she started to play better. Caught a few lines, had some really good shots. She was being really aggressive. I don’t know if there was just one momentum shift,” Azarenka said after the match.

In a three-week span that saw her shine off the court just as much as she did on it, the Japanese No. 1 further cemented her status as a superstar not just in women’s tennis, but international sport as a whole.”

Osaka showed up for Saturday’s match wearing a mask with the name of Tamir Rice, a Black 12-year-old boy killed by police in Ohio in 2014. That was the seventh mask she’d used during the tournament, after honoring other Black victims of violence: Breonna Taylor, Elijah McClain, Trayvon Martin, Ahmaud Arbery, George Floyd and Philando Castile. Floyd’s brothers taped a congratulatory message to Osaka following her win.

“The point,” Osaka said, “is to make people start talking.” 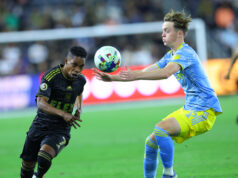 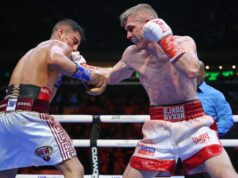 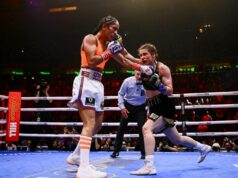