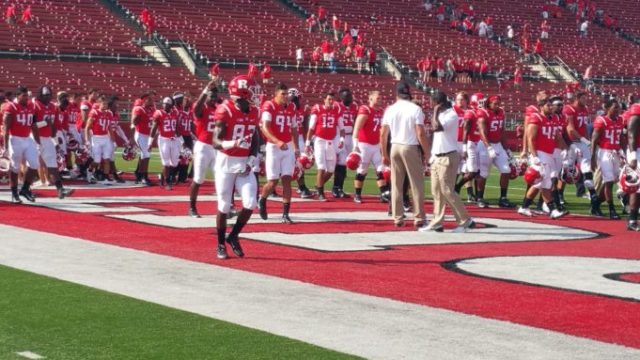 Piscataway- In front of a crowd of 45,245 Rutgers gave their fans a serious stomach ache with the lack of fundamentals play in the first half.  It would’ve been one of the most unexplained losses in RU history.

Someone forgot to remind Howard to how mind their manners when they’re in someone else’s house.  The Bison opened the game with a 9 play, 89 yard run that chewed up 4:16 off the clock with Kalen Johnson connecting a 38 yard strike to Robert Mercer for a touchdown.

After Rutgers quarterback Chris Laviano’s pass was intercepted by Alonte Dunn, the Bison strung another drive together that burnt 1:26 off the clock for a RU score.  In a blink of an eye, Rutgers was down 14-0 in the first quarter.

The RU team must’ve drank some of the Knight’s gatorade when Janarion Grant took the ensuing 84 yard kickoff to the house with a Janarion like flare.  This was the boost they needed to shake off the rust to beat the FCS member Howard 52-14 in the home opener at High Point Solutions Stadium.

” Really a tale of two halves, we did not start the game the way we wanted to start it.  Touchdown on defense, turnover on offense, another touchdown, we’re down 14-0 before the game really even started.  It’s not the way we start football games. We recovered, rebounded and hung in there in the first half. Got into halftime, made some corrections, adjustments, really just motivated the guys to go out and play the way we needed to play.  We came out in the second half, and I think we controlled the line of scrimmage.” Rutgers head coach Chris Ash said.

The Scarlet Knights made some half time adjustments and outscored the pesky Bison, 21-0 in the third quarter.  RU accumulated 375 rushing yards, the most in a game since 2007.

Rutgers junior quarterback Chris Laviano threw for 11-22 with 137 yards, three touchdowns and an interception.  The Knights amassed 512 yards from the line of scrimmage overall after being outgained by Howard 248-151, in the first half.

“There was no panic in us today. We knew if we were going to be successful, we just had to play our game and stay with the game plan. The turning point of the game was when Janarion ran the kickoff back, that was the spark we needed to settle our team. The game plan was very simple, get the ball to Janarion and let him make plays.” Said Rutgers Chris Laviano

Even with RU’s lack luster performance in the first half, the Knights managed to go into half time with the score tied 14-14.

Rutgers’ Janarion Grant was the headliner of this story; each time the Knights needed a play, they needed to look no further than the jersey of # 1.

The Scarlet Knights, who host New Mexico next Saturday at noon in Piscataway, must play a discipline brand of football if they want to beat the option happy Lobos. 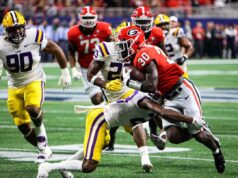