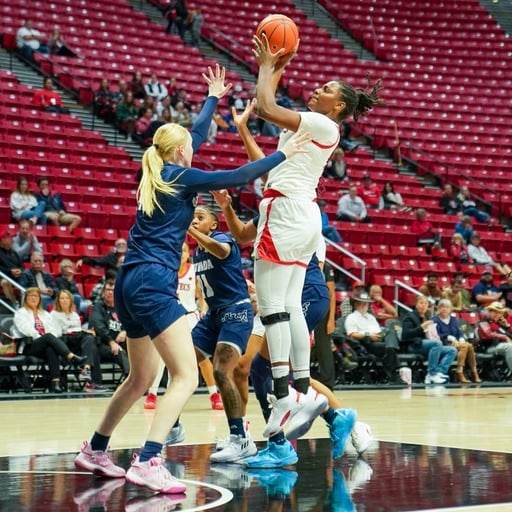 San Diego, CA—-Sometimes all you need is some home cooked meal to get your game right. San Diego State are finding ways to outduel their opponents in the waning minutes of ball games.

“We’re still learning and trying to figure out who we are,” Aztecs coach Stacie Terry-Hutson said. “I thought we played about twenty good minutes of basketball. I didn’t think we played a very good second half and we allowed too many points in the fourth quarter. I talked to the team about how winning is great, and it’s something we enjoy doing, but our goal is to get better every day.”

Nevada jumped on the Aztecs early with a long trey by Alyssa Jimenez and a basket by Megan Ormiston, but SDSU would answer back with a three and a bunny to reclaim the lead. Forward Kennedy Lee got a easy layup on a Aztec’s turnover a bucket which allowed Nevada to retake the lead, she score seven of her nine points in the first quarter. The Aztecs wasn’t going to lay down, they answered with a deep three. Lexie Givens joined scoring party with a layup to tie the game in first quarter as the quarter came to a close. San Diego State drained another 3-pointer to take a 20-17 lead that carried over after the first 10 minutes of the second.

The Pack cut a 20-point deficit down to single digits in the fourth quarter with 2:50 left in the game, but San Diego State held off Nevada with stellar defense and timely shooting.

The Aztecs shot 55% from the floor and 53% from three to help them earn their 10th double-digit win of the season.

Junior guard Alyssa Jimenez led all scorers with a career-high 17 points while matching a season-high five steals. Ormiston and junior guard Victoria Davis each chipped in 12 points for the Pack. STAT OF THE GAME
SDSU shot 55.4 % from the court after shooting 56.5 percent at Utah State on Saturday. This is the first time in the Mountain West era that the Aztecs have shot 55% or better in consecutive games. 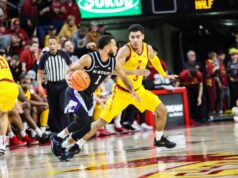