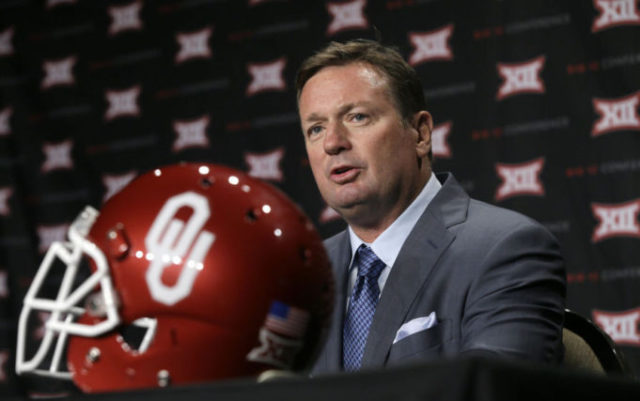 Only one day after Oklahoma’s appearance at Big 12 Media Days in Dallas, OU coach Bob Stoops was in Bristol, Connecticut, taking part in the “car wash” with other Big 12 coaches at ESPN headquarters.

Here’s some of what Stoops had to say Wednesday on various ESPN programs:

On his career: On air during the “Russillo and Kanell” show, the hosts gave Stoops a hard time about some of the questioning he faced in Dallas related to how long he plans to keep coaching.

“What are they doing to you down there?” Stoops was asked. “They’re trying to turn you into some retiree.”

“Yeah, what, I’m always showing up with half a tank?” Stoops joked. “Come on. I give better sound bites, at least, in the Big 12 than most, I’m guessing.”

On “First Take,” Stoops also spoke about the past, present and future of his tenure at OU.

“I really don’t (think about legacy). I’m always looking forward. There’s no time, really, for me to sit and reflect, not at this time because we’re still in the heat of everything. And I’m only 55, so I want to keep chasing, whatever that may be. I’ve been very fortunate and blessed to be with the same leaders — the same president, David Boren, the same athletic director, Joe Castiglione — now for 18 years, and that doesn’t happen in today’s world.”

“They’ll be thoughtful about it, our leaders, our presidents, athletic directors, commissioner. … What brings value to our conference?” Stoops said. “If there’s value to be brought and it improves what we’re doing, then, hey, I’m all for it. We’ve been fortunate in that we’ve been in the national championship BCS formula when there’s been 12 teams, and we’ve been to the final four when there’s been 10 teams just a year ago. So whatever they come up with, I’ll be all for it.”

On the media: Stoops said he handles interviews differently than he would have 10 years ago. Over the past few days especially, Stoops has been laughing, joking and providing more insight than usual.

“There’s more of it,” Stoops said. “Our recruits are watching more than they used to. A little bit of it, (ESPN is) entertainment — we’ve got to do some entertainment, as well. And anymore, I think letting a little more of your personality show in today’s world … sometimes is better for you.”

On something most don’t know about his team: Stoops said it has been talked about it before, but still credited the tight-knit nature of his team.

“(They are) all brothers of all different ages and races and religions, and that’s the neat thing about being in a football team, is when you have that type of togetherness and inclusion, which you wish would spread throughout the country,” Stoops said.

On rumors: Stoops said he tries to insulate himself from the rampant rumors that have spread around over the years — Stoops on the hot seat, Stoops going to the NFL, etc.

“I can’t say I hear as much as maybe you think I do,” Stoops said. “When you’re in this position, especially for 18 years, you can expect all of that.”

Stoops even joked he had never heard about being under fire at OU. Of course, he quickly relented.

“Anytime we lose a game, let’s put it that way,” Stoops said. “Don’t worry, I know it, I’m kidding. But you do the best you can, and in this position, that’s all going to come, so be ready for it and let it all wash off and keep doing your job the best you’re able to.”

“I’ll be rooting like crazy for him,” Stoops said. “Everybody in our program loves him. He was a great leader here, worked hard, did everything you wanted, and he’s a talented young man. He’s got speed, he’s got quickness, he’s got an excellent arm. … I’ll be with all the A&M fans in rooting hard for him.”

Are the Sooners getting more than they initially bargained for when they open the season Sept. 3 against Houston?

“To be fair, at the time they were scheduled, they weren’t a top-10 team, but they are now,” Stoops said. “Coach (Tom) Herman and his staff and players have done an awesome job. They beat Florida State by a couple touchdown in their bowl game. We realize that it’s going to be a major challenge, and we’ll need to be at our best right away.”

How long did it take for Stoops to become comfortable in Lincoln Riley’s first year as offensive coordinator?

“I was comfortable after spring ball, to be honest with you,” Stoops said. “I knew we had a long ways to keep building on it, but I loved the direction of it, what Coach Riley was doing in the offense. … I was all in on it, and fortunately it really worked. And one part that came together — it was a little bit late, but it came together — was our running game. And that was maybe a little bit different than what Coach Riley had before … As time went last year he really meshed it well and really grew in it with our offense and the way we progressed through the year.”

“From our president on down, to our athletic director, there’s just great inclusion overall,” Stoops said. “When you look at us overall, we had a great year athletically. With us in the final four, basketball in the Final Four, men’s and women’s gymnastics national champions, softball national champions. Everybody pulls for one another.”