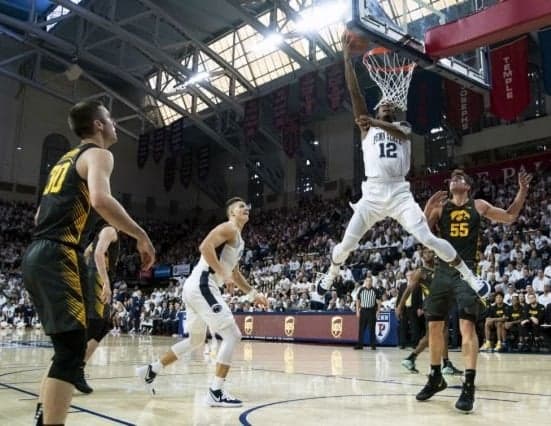 The 93-year-old Palestra had a capacity crowd of 8,725 on hand, 90% of them in Penn State colors and ready to cheer their team on.

Seth Lundy and John Harrar took the floor after the under-8 timeout with PSU trailing 23-19. Lundy quickly hit a jumper to break a scoring drought by the Liona. Harrar then got 2 consecutive rebounds and Lundy got an offensive rebound and took the ball out for a three and drained it. Before you can blink the Nittany Lions were up 25-24 with Watkins and Stevens on the bench.

Penn State led 39-38 at the break. Garza had 15 points and seven rebounds in the opening 20 minutes. Wieskamp had 10 points. Ryan Kriener chipped in eight points off the bench.

“Our vision has always been to be a Top 25 team, to find success and go to the NCAA Tournament consistently,” Chambers said.

The game could have been a little different if the Hawkeyes didn’t miss seven crucial free throws down the stretch. They also committed 15 turnovers in the contest.

Izaiah Brockington scored 8 quick points to set the pace for Penn State in the opening minutes in the second half. Jamari Wheeler made a layup, then a steal and pass for a bucket by Seth Lundy. The Lions led 59-56 with 13:25 to go on the clock and were able to hang on without their senior leaders on the floor.

Garza, who scored 44 points last month at Michigan, scored 12 straight points in one stretch in the first half but missed two foul shots with 3:21 left and Iowa holding on to a two-point lead.

Garza went 1 of 2 from the line to even the score at 79-all. Watkins delivered for the Lions with a go-ahead dunk before Stevens sealed it with a late layup — and yelling in jubilation.

“Playing in high school is great, but it’s nothing like coming back and playing in college,” Stevens said. “It’s just the environment and how loud the crowd gets. It’s mainly only Penn State in the gym, cheering for us.”