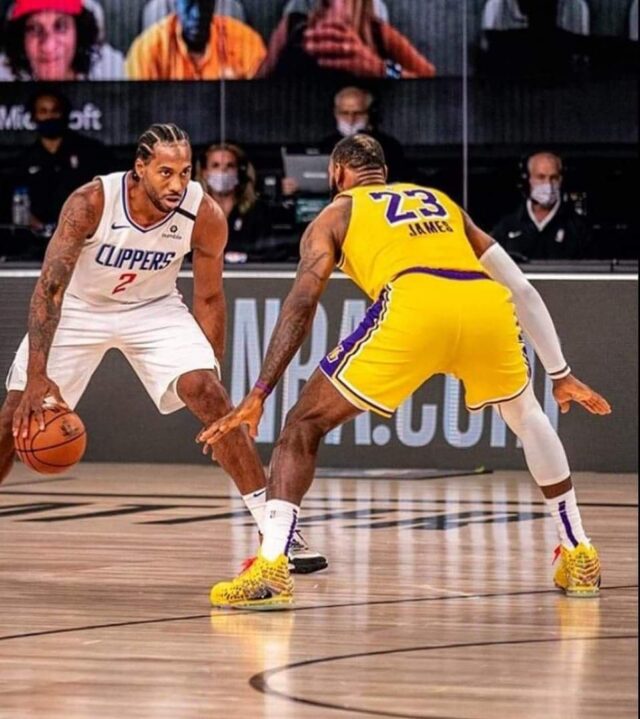 Lake Buena Vista, Fla.—The NBA is now back and players are trying to shake off the rust from the over four-month hiatus due to Covid-19.

During the crisis, there have been numerous discussions about racial injustice happening around the country — it is a theme that surrounds the restart of the NBA season. The courts have “Black Lives Matter” on them, and both the Clippers and Lakers knelt during the national anthem in a silent protest to demand equality.

Thursday night marked the NBA’s first game action in 141 days as the league’s getting back to some normalcy after the pandemic forced a shutdown.

In the first game for both teams, the Clippers and Lakers played a little sloppy in the first half until the teams settled in the third. Anthony Davis was the game-changer of the night—having 34 points and killing the Clippers on the blocks.

When the was game on the line, it was Lebron James following up his own missed shot that proved to be the winner in a close 103-101 win for the Lakers.

“The game of basketball has always been bigger than the ball and the rim, 10 guys on the floor and referees,” Lebron said. “It’s an opportunity to use this platform and spread a lot of positive, a lot of love throughout the course of the whole world. We understand what is going on in society right now and we’re using this NBA playoff format, as the players, as coaches, as organizations, to continue to stand strong on that. This is a good start tonight. It’s great to have the NBA back.”

Before the game, the two teams knelt during the anthem, together with joining arms and wearing Black Lives Matter T-shirts, to remind America about the social injustices that pervade the country.

Paul George scored 30 points for the Clippers, who looked unguardable and 28 from Kawhi Leonard, who was dominant on both ends of the court. The Clippers other half shot 14-of-41 (34.2%) from the floor, while the remaining three starters were just 4-of-17 (23.5%). They were very loose with the ball, turning it over 20 times. The Clippers missed having Lou Williams coming off the bench to inject some life and energy into their offense.

“When you don’t have guys, you have to execute. We didn’t execute many plays tonight offensively,” Doc Rivers said after the game. “We had 20 turnovers. We gave up offensive rebounds. We lost guys in coverage defensively. So in that way, it was disappointing.”

Davis’s 34 points came on 19 shots, but he got to the charity stripe line 17 times. AD put the Clippers on their heels with his ability to attack the rim and they fouled him often. The Clippers do not have a defense to negate Davis’s dribble-drive penetration on the wings.

The Laker’s Kyle Kuzma scored 16 points and Dion Waiters had a strong night chipping in 11 points with 21 minutes on the floor.

With the victory, the Lakers’ magic number is one to clinch the No. 1 seed.

King James had 16 points, 11 rebounds and seven assists to help the Lakers move 6 1/2 games ahead of the Clippers in the West with seven games left.

“It felt like a real game to me, two teams battling. Can’t complain for the first game,” Davis said.

At the break, the Lakers took a 54-42 lead and it looked like the Clippers were going to get blown out of the bubble.

The Clippers had their opportunity early in the game, they had an 11-point lead midway through the third but could not stop turning the ball over to the Lakers. The Clippers got the lead after a 26-5 run (68-59); the Lakers immediately responded with a 36-14 run to take the drive (95-82).

The game came down to George’s 3-pointer with 1:50 left that trimmed the Lakers’ edge 99-98. James bullied his way to a layup on the next possession, and George answered with a long three to tie the game at 101 with 29 seconds remaining.

James followed his own miss down the lane for the go-ahead basket, then was brilliant on the last defensive possession — forcing the ball out of Leonard’s hands and covering George as his 3-point try at the buzzer misfired.

“We can’t have self-inflicted wounds and I thought we had too many of them,” said Clippers coach Doc Rivers, whose team — which remains short-handed with Lou Williams still in quarantine and Montrezl Harrell tending to a family matter — gave up 29 points off turnovers.

It is an evident time for significant change in the country right now. If having players kneel during the national anthem and wearing Black Lives Matter T-Shirts are too much for a person to handle, then you might as well move on because this generation is not backing down from no one.