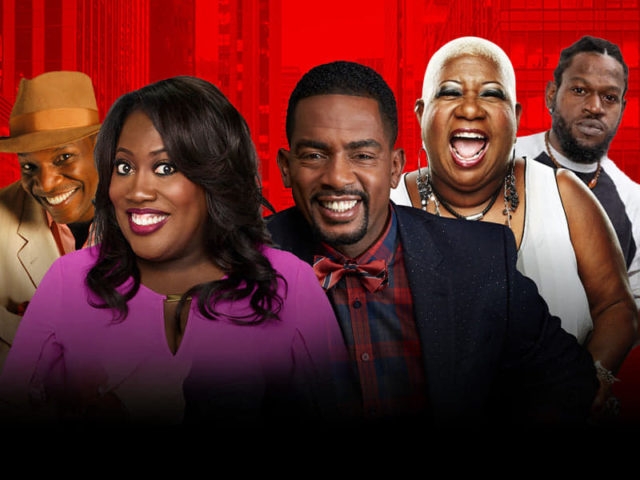 Newark’s own Bill Bellamy, first gained national notoriety on HBO’s Russel Simmons’ Def Comedy Jam, where he is credited for creating or coining the phrase “booty call” and has appeared in countless TV shows and movies including Def Comedy Jam, Who’s Got Jokes?, Last Comic Standing, Any Given Sunday and Issa Rae’s Insecure. Bellamy will be coming back home to bring some comedic love on Valentine’s Weekend at the NJPAC.

In the early-1990s, Luenell appeared regularly on Soul Beat TV on the Oakland, California cable station KSBT where it all started for the comedian. Best known for her role as the “hooker with a heart of gold” in Borat, along with appearances in A Star Is Born, Snoop Dog’s Bad Girls of Comedy and Eddie Murphy’s new Netflix film Dolemite Is My Name.

Don “D.C.” Curry, former pro-athlete turned standup comic, who first got his start on BET’s Comic View and is best known for starring as Craig’s sex-crazed Uncle Elroy Jones in Next Friday and Friday After Next and for his role on the sitcom Grace Under Fire. Curry was also featured in The Boondocks episode, The Color Ruckus, in which he voice acts Uncle Ruckus’ Caucasian-hating adoptive father.

Ron Dailey, more commonly known as “Blaq Ron” is burning up the comedy scene at a gasoline infused pace! Regaled as one of Texas’ hottest young comedians, this young man has certainly hit the ground running.

The hilarious, award-winning Sheryl Underwood, co-host of The Talk a role she first stepped into in September 2011. She performed on Def Comedy Jam, hosted BET’s Comic View and made unforgettable appearances in films like Beauty Shop and I Got the Hook-Up. She first rose to prominence in the comedy world as the first female finalist in 1989’s Miller Lite Comedy Search.