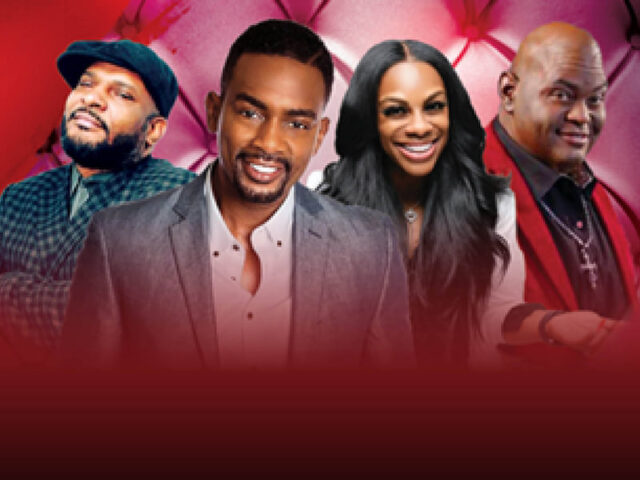 Newark’s own Bill Bellamy, first gained national notoriety on HBO’s Russell Simmons’ Def Comedy Jam, where he is credited for fashioning the phrase “booty call” and has appeared in countless TV shows and movies including Def Comedy Jam, Who’s Got Jokes?, Last Comic Standing, Any Given Sunday, How To Be a Player, The Brothers, and Issa Rae’s Insecure. Bellamy will be coming back home to bring some comedic love on Valentine’s Day Weekend at the NJPAC.

Lavell Crawford is quickly climbing the comedic ranks and becoming one of the hottest stars in the biz today. He filmed a new one-hour special in his home town of St. Louis, “Can A Brother Get Some Love?,” and is on DVD from Entertainment One. In addition, he filmed an episode of “Workaholics” for Comedy Central and he’s been casted in a recurring role on the AMC’s Emmy Award-winning “Breaking Bad.” If that’s not enough, he was also seen as a regular panelist on E! Entertainment’s “Chelsea Lately” and a regular on “Lopez Tonight,” performing in various comedy sketches on the show. From his numerous television appearances and as one of the hottest touring acts in the country, audiences are becoming increasingly familiar with Lavell’s giant-sized talent.

Freddie Ricks recognized his gift early on by impersonating characters he saw on television and in everyday life. Born and raised in the Bronx, New York, comedian Freddie Ricks encountered many diverse cultures. When viewing his show the audience sees how he so artistically incorporates characters of African, Indian, South American, and European descent into his act. You may have seen comedian Freddie Ricks on BET’s Comic View, Def Comedy Jam, The Apollo Comedy Hour and It’s Showtime at the Apollo to name a few. Freddie Ricks is one of the hottest and most versatile clean comedians in the business.

Special Guest: Jess Hilarious aka Jessica Robin Moore is a Comedian, Jess Hilarious was born in February 1992, in Baltimore City, Maryland. Jess began her career on Instagram airing comedy skits, was featured on Nick Cannon’s VH1 show ‘Wild N Out’ for several seasons making a name for herself. She’s also made numerous TV appearances on BET and specials on All Def Comedy segments.