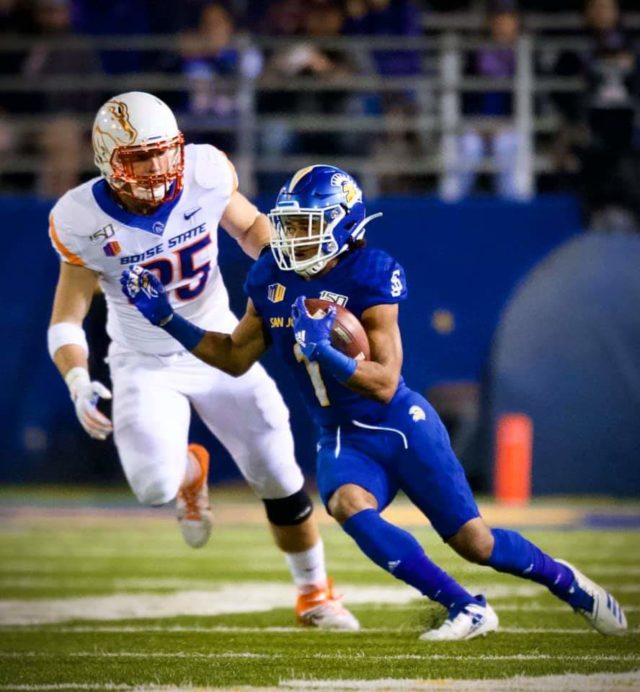 Boise had been bitten with the injury bug and played without their starting running back, left guard and safety. However, freshman quarterback Hank Bachmeier entered the contest with 1,547 passing yards and nine touchdowns. Although the Spartans are 0-13 all-time against the Broncos, these Spartans are much improved under the direction of Head Coach Brent Brennan. They average 28.4 points per game and are 4-1 when they score 30 points or more.

The Spartan’s offense in the first half was unstoppable and jumped out to a 13-0 lead. Spartan wideout Tre Walker had 7 receptions for 130 yards within minutes of the second quarter. Bailey Gaither contributed with 5 catches for 71 yards. Boise’s offense was held in check in the first quarter.

The first Bronco score came from a 66-yard punt return from Avery Williams. Later, in the second quarter, Boise wideout John Hightower snatched a 41-yard pass out the hands of a Spartan defender. This brought Boise to the 5-yard line. The Broncos were 4th and goal from the 1-yard line when running back George Holani barreled into the end zone for a touchdown.

With 1 minute remaining in the half, Boise was assisted with a roughing the passer penalty. The Broncos settled for a 30-yard field goal. The Spartans entered halftime with a 24-17 lead and the momentum of the home crowd.

The second half was a duel to the finish. It was the prolific passing of San Jose’s Josh Love (29-53, 438 yards) versus the ground game of the Boise Broncos. In the 3rd quarter, Boise had 2 touchdown drives to take the lead. The Spartans responded and closed the score to 38-34. Except for 1 sack, the Spartan line held Curtis Weaver, Boise’s top NFL prospect in check.

Boise relied on its run game in the 4th quarter. With Boise leading 45-34, the Spartans had 6:24 to mount a comeback. The Spartans drove 66 yards and scored on an 11-yard touchdown pass to Bailey Gaither. The 2 point conversion pass to Tre Walker was successful and the score was now 45-42 with Boise in the lead.

The Broncos went back to pounding the ball. The Spartan defense faced a 3rd and 1 with 3:38 left in the contest. Boise handed the ball to running back Holani to seal the victory. Holani punched it in from 8 yards for a final score of 52-42. Boise rushed for 6 touchdowns and 259 yards for the game. The Spartans have arrived and proved to be a formidable program. Nobody left the stadium without validation that their team was a fierce competitor.