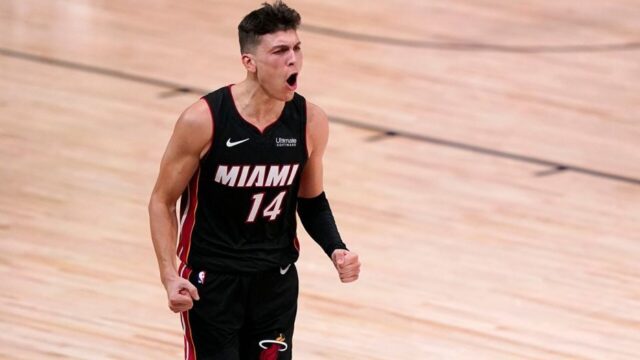 Orlando, Fl—When their backs are against the wall, The Celtics finds a way to put it altogether as a unit.

They put all the squabbling to the side and went out to play sixty minutes of quality basketball.

Jaylen Brown scored 26 points, Jayson Tatum chipped in 25 and Boston are back in the thick of things into the East finals with a 117-106 win over the Miami Heat in Game 3 on Saturday night. Kemba Walker added 21 to help Boston pull to 2-1 in the best-of-seven series.

”There’s some great guys in that locker room,” Brown said. ”A lot of emotion, a lot of passion, but we’re a family and we’re here for each other at the end of the day. We exemplified that when we came out together. We kept our will high and we persevered to win this game.”

The Heat, who is now 10-2 this postseason, still holds a 2-1 series lead. It marked Miami first double-digit loss of the 2020 playoffs.

Boston led from start of the game, setting the tone in the first half with a 63-50 lead into the break.

The Celtics, who were angry in their postgame locker room after Game 2, were a lot jovial Saturday after holding the Heat to 39% shooting.

”We have great competitive spirit and we showed it tonight,” Walker said.

Bam Adebayo had 27 points and 16 boards for the Heat. Tyler Herro chipped in 22 points, Jimmy Butler had 17 and Duncan Robinson 13.

”We’re not the type of team where we can go through the motions and try and figure out everything in the first half, and then in the third or fourth we just try to turn it on,” Adebayo said. ”It’s not like that. We are not that type of team. We’ve got to play with detail.”

After rallying from a double-digit deficit in five of its past six playoff wins, Miami could not complete a comeback this time as the Celtics’ lead got up to as many as 20 points in the second half. The Heat cut the deficit to five points with 55.9 seconds to play in regulation, but it was a little too late.

Celtics forward Gordon Hayward made his return after missing the previous 12 games because of a sprained right ankle he sustained in the postseason opener. Hayward finished Saturday’s win with six points, five rebounds and four assists.

Boston got within eight points on a long trey by Robinson with 1:12 left in the game, giving the Celtics some glimmer of hope. Brown committed a flagrant foul nine seconds later, and Robinson made one of two free throws to cut Boston’s lead to 109-102.

Adebayo scored on the next possession to get the Heat within five points to finish off a 24-9 run, but Miami could not get any closer.

“We wanted to really attack,” Celtic coach Brad Stevens said. “If we’re putting it on the floor, we want to get to the rim and make a play for ourselves or others. And then if we’re not pressuring the ball defensively, if we’re waiting to be attacked, we stink. So, might as well pressure and see if we can be good.”