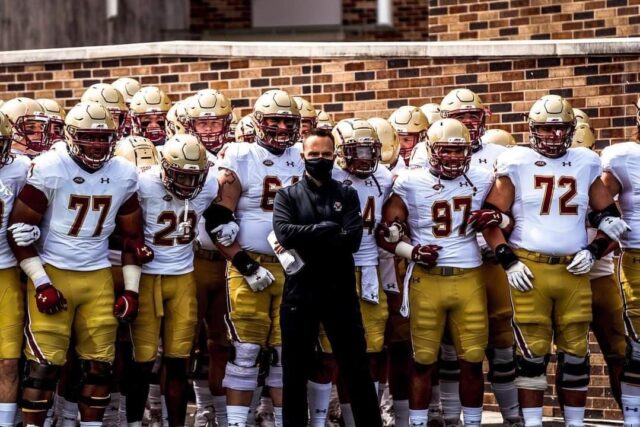 Chestnut Hill, MA—On Saturday, the Jeff Hafley era finally got underway with a bang. Boston College (1-0) beat Duke (0-2), 26-6, outscoring the Dukies 19-0 in the second half to seal the win at Chestnut Hill.

Saturday’s game was the first time since 2017 that BC allowed fewer than seven points, and it’s the first time they’ve done so on the road since 2008. Hafley is widely considered to be a defensive genius and we got a little taste of that Saturday afternoon.

Boston College scored on their first possession, the Eagles quarterback Phil Jurkovec hit Flowers for a 40-yard reception and running back David Bailey capped a 10-play, 81-yard drive with a 1-yard run to put the Eagles up, 7-0, early in the first quarter.

Phil Jurkovec the Notre Dame transfer earned the start at quarterback and responded confidently after what he called a “skittish” first half. Sophomore wide receiver Zay Flowers racked up five catches for 162 yards and a touchdown, redshirt junior tight end Hunter Long had seven catches for 93 yards and a score, and the BC defense forced five Duke turnovers.

On the next Eagles’ possession, Jurkovec threw an ill advise ball into double coverage. Duke picked it off and made good of the turnover with a score to cut BC’s lead to 7-6. Jurkovec confidence seem to get rattled but Hafley told him to have fun and trust himself.

“The kid hadn’t started a game since his state championship in high school,” Hafley said. “We knew he’d have some nerves, he’d be anxious. It’s a position where the experience gets you better. I had no doubt. I told him at halftime, ‘Just go play, man. You’re doing a great job.’ After the pick, I said, ‘Hey, no problem. Go play.’ Look what he did in the second half.”

Jurkovec got his head straight in the second half, hitting Long for a 9-yard TD reception on one drive and finding a wide-open Flowers for a 61-yard score on the first play of the next one. He finished the day 17 for 23 with 300 yards passing with two TDs and the one pick, and he also had 12 carries for 43 yards on the ground.

After Jurkovec settled down, he was able to find passing lanes for his receivers. Duke head coach David Cutcliffe said Jurkovec made some throws that “you don’t have answers for.”

“I haven’t been out there playing real football in so long,” Jurkovec said. “Getting out there, taking hits and playing again was so much fun.”

Flowers finished the game with 22 catches for 341 yards and three touchdowns and had 27 carries for 195 yards and a touchdown.

“To be a part of this offense, I get to show what I can do now, instead of just taking handoffs the whole year,” Flowers said. “I get to actually run routes now, and show everybody that I can run routes and I’m just not a jet sweep guy.”

BC’s offense was rolling on the opening drive and in the second half, the Eagles defense was outstanding all game long.

It was an emotional win for Hafley and for the Eagles. The players played their hearts and soul for Hafley in the opener. There are more wins coming to Chestnut Hill under Hafley trust me.