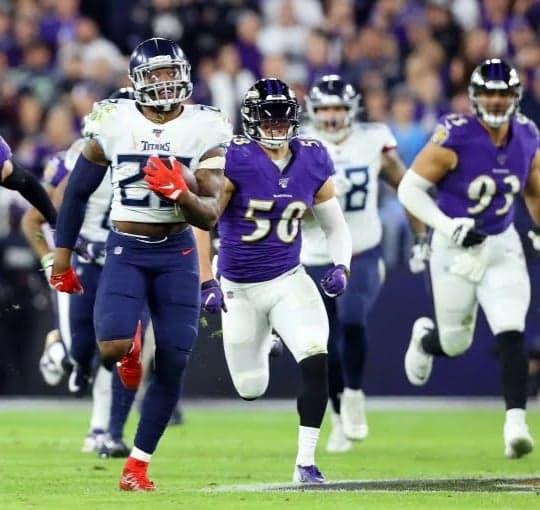 Baltimore, Md — The Titans pulled off another upset on the road in the playoffs, this time beating the Ravens 28-12 one week after beating the New England Patriots 20-13 in Foxboro. The Tennessee advance to the AFC Championship game for the first time since 2002.

The game plan is very simple for the Titans let Henry pound the ball inside and throw the ball down the field when the line of scrimmage gets crowded.

Tennessee’s defense made some adjustments just for Jackson which had two interceptions and recovered lost a fumble by Jackson, plus the Titans (11-7) twice stopped Baltimore on fourth-and-1.

Lamar Jackson struggled the entire game against the Titans, who mostly kept him contained with a zone defense.

Jackson had three turnovers — two interceptions and a lost fumble — and was sacked a few times at critical times. The only time Jackson was able to pick up a chunk of yardage is when the Titans went into their prevent defense.

“We beat ourselves,” Jackson said. “We had, I had, a lot of mistakes on my half, Three turnovers, that shouldn’t happen. They came out to play. We started slow. We just have to do better next time, but moving forward, get ready for this offseason, get ready for next year.”

The Titans scored all of its points off takeaways or fourth-down stops which were the difference in the game.

Receiver Marquise Brown was the only bright spot for the Ravens, finishing with 126 yards on seven receptions.

Tennessee played a very physical, fearless game, dominating both sides of the line of scrimmage. Quarterback Ryan Tannehill just managed the game threw for just 88 yards, but Henry ran through the Ravens all game long including a 66-yard run that set up a third touchdown right after Jackson had been stopped on a fourth-and-one. Baltimore had converted 71 percent of fourth-down attempts during the season, but Jackson had nowhere to go against the Titans’ defensive pressure. Jackson accounted for 508 scrimmage yards, although many of them came when the game was out of over.

“We came here in a hostile and difficult environment and get off to the fast start that we talked about,” Titans coach Mike Vrabel said.