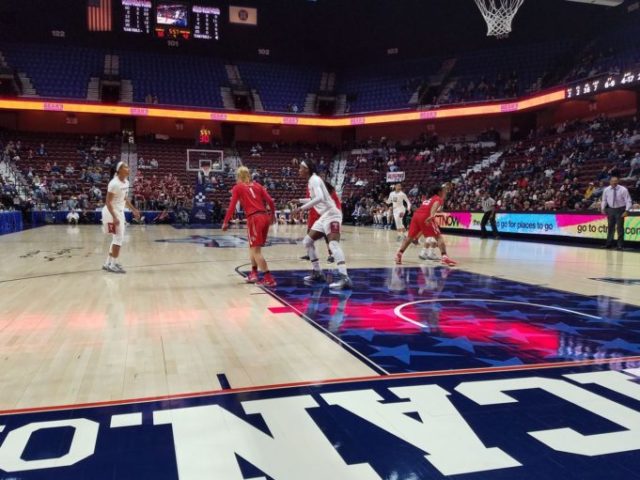 UNCASVILLE, Conn. –The Owls led by senior Feyonda Fitzgerald knocked off 10th-seeded Houston, 67-58, in quarterfinal at the Mohegan Sun Arena. Temple improved to 24-6 overall with the win, while Houston ends its season at 12-19.  Fitzgerald set an American Athletic Conference tournament record, scoring 30 points in the game.

Feyonda Fitzgerald and juniors Alliya Butts and Tanaya Atkinson combined for all the fire power the Owls needed scoring all but two of Temple’s 67 points. Butts finished with 19 points, and Atkinson chipped in 16 points. Fitzgerald finished out her star-studded night with a game-best seven assists, while Butts had two steals. Tanaya Atkinson ended with a double-double, also was the secretary of defense grabbing 12 rebounds.

“When we are clicking and our offense is in the right flow it is very difficult for teams to match us with us. We are a physical and attack oriented team, we want to run up and down the court in transition. Hopefully we can keep playing well and keep moving in this tournament.” Said Temple Feyonda Fitzgerald.

Both teams started out very sluggish the Cougars took an early advantage with three minutes into play finding their post presence, but the Owls ran off five quick points from Alliya Butts to take an early7-5 lead. Houston tied Temple at 7-7, but Fitzgerald started an 8-0 run to put the Owls up 15-7 before a three by Angela Good in the final seconds to make it 15-10 after the first period. The Cougars opened the second period on a 5-9 run to tie things at 15-15, before the Owls took a 19-16 advantage on an Atkinson baseline jumper. Houston again responded, this time taking the lead, as Angela Harris nailed a three from the right corner making it 22-21 Houston with 5:49 to play. Temple was able to regain its composure, closing the game with a 7-3 run to lead 28-25 at the break.

The achilles heel for Houston Cougars they couldn’t keep Ruth Sherrill and Feyonda Fitzgerald of the boards. The Owls had 18 points from second chance shots.

Although Temple’s guards accounted damn near all the scoring, seniors Ruth Sherrill and Safiya Martin each played major roles in the close win. Sherrill pulled down game high 15 rebounds, helping the Owls to a 40-33 advantage on the boards. Martin added seven rebounds, tying a season high with four blocks playing 34 crucial minutes for Temple.

Houston shot just 34.6 percent from the field in the first half, but the Cougars were able to hang with the Owls by holding Temple to just 37.5 percent and working the ball inside to the tune of 12 points in the paint through the first 20 minutes of the game.

Fitzgerald open the third period on fire with 7 quick points, the Owls came out hot for the third quarter, quickly mounting a 37-27 lead, their largest of the game thus far. The Cougars wouldn’t go away quietly countering with a 7-2 surge of their own to make it a five-point game, but the Owls got a pair of free throws from Atkinson and a Butts three to go up 44-36 after three.

Temple defense kept up the full court pressure in the fourth quarter holding Houston to just six points over the first 5:30 and extending their lead to 12 points at 54-42. Twice the Cougars cut the lead to 10 points, but the Owls made a small 5-0 run, capped by a 3-pointer by Alliya Butts to extend the lead to 15 with just 3:29 remaining in the game. Houston responded with a 5-0 run of their own, but it was Butts again from deep corner on the left baseline with 2:26 left to play, making the score 64-51.

“ I am very proud of the game we played. Fey made some big shots and that is what we expect of her. I can’t talk enough about Sherrill and Atkinson hitting the boards like they did to give us a shot in this game, without them being relentless on the glass we are talking about a different game for us.” Said Temple Coach Tonya Cardoza. 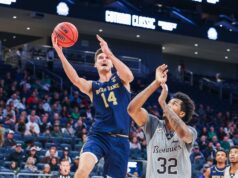 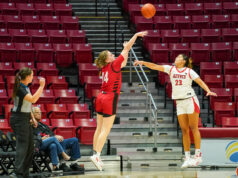 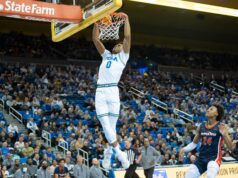