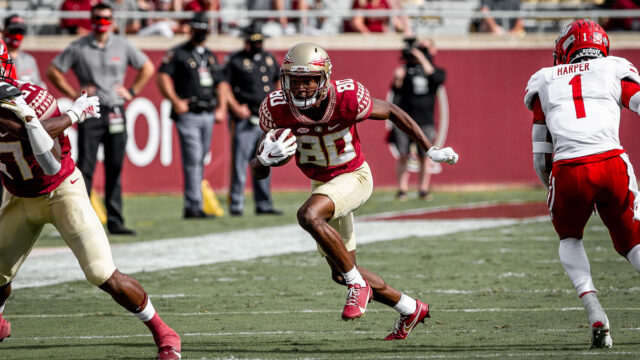 Tallahassee, FL–The Seminoles (1-2) was down 14-0 in the first quarter and went scoreless on its first four drives with true freshman quarterback Tate Rodemaker at the helm and was 21-14 at the half.

FSU picked up its first win of the Mike Norvell era against Jacksonville State.

“Didn’t necessarily start it off like we envisioned,” Norvell said.

“But like I told the team throughout the course of the week, there are only so many moments that come along through the course of your career that you can really come back to, and you see a moment where you decide to make a change and decide to go out there and become a defining moment.

“Really tonight, I think when you’re down 21-7, we had that opportunity. It didn’t go necessarily like we wanted to in the beginning, but it went like we needed it to.”

The Seminoles made some halftime adjustments on offense and put up 20 points in the third quarter to take control of the game  behind sophomore quarterback Jordan Travis.

Travis entered the game and marched the Seminoles to back-to-back touchdown drives to end the first half and opened the second half with another score to knot the game at 21.

His running capabilities is phenomenal and it forces defenses to collapse on him, which opens up the passing game and also opens up lanes for the backs.

Travis finished the contest 13-for-18 with 215 yards and a touchdown. He also ran for 39 yards on 12 carries and had a touchdown on the ground.

“We knew we could potentially get a spark with his legs, but you saw all the work he’s put in throughout the offseason,” Norvell said.

It took a while for the offense to get going, but the Seminoles finally got its three running backs going.

Freshman Lawrance Toafili performed very well against Miami late in the contest, but La’Damian Webb and Jashaun Corbin both struggled to get creases to run.

Once Travis entered the game, all three running backs found some success.

FSU’s offensive line was able to open up some holes for the backs and the coaches were pleased with their production.

“I believe Jordan Travis brings another threat and does a good job of bringing opportunities to other players to perform better,” FSU coach Mike Norvell said after the win.

Zerrick Cooper completed 22 of 30 passes for 232 yards and had a rushing touchdown. Cooper, who threw for back-to-back 3,000-yard seasons at JSU, was efficient but a fourth-quarter pick snatched by Florida State’s Asante Samuel Jr. all but ended the Gamecocks’ comeback attempt.

“It wasn’t pretty at some points tonight, but it might’ve been exactly what we needed,” Norvell said. “We needed to be able to respond to adversity, to have some sustained success.”

JSU’s Kolbi Fuqua also had a 13-yard interception return for a touchdown in the first quarter.

“To be able to see the guys’ eyes and their smiles after facing adversity early on in the game was a great joy,” Norvell said.