Morgantown, W.Va. —Baylor (1-1, 1-1) came up inches short on a fourth-and-goal play in regulation, then turned it over in the second overtime as the Mountaineers (2-1, 1-1) overcame four  turnovers to slide by with a 27-21 win Saturday afternoon at Milan Puskar Stadium.

Tailback Leddie Brown scored on a 3-yard touchdown power run in the second overtime after West Virginia’s defense made a key stop in the trenches.

The Mountaineers squeaked out the win but if they want to have a successful season, they have to clean up on some things on offense. Baylor had 200 rushing yards a week ago against Kansas but only manage 256 yards overall against West Virginia.

“It wasn’t a thing of beauty, but offensively we didn’t lose the game,” said West Virginia coach Neal Brown. “A lot of credit to our offensive guys for regrouping, not getting down, and finding a way to put the ball in the end zone twice in overtime.”

The Mountaineers took the opening kickoff and marched 70 yards on 15 plays to go quickly 7-0. Quarterback Jarret Doege completed 7-of-8 for 51 yards on the drive and scored on a one-yard keeper.

The Bears came roaring back with an interception by safety J.T. Woods. Brewer hit Tyquan Thornton for 18 yards, then spotted R.J. Sneed in the back of the end zone for a seven-yard TD pass. Mayers’ extra point tied the score at 7-7 with 6:44 left in the half.

Baylor got the ball back in the final minute before intermission and another chance to put some points on the board and take its first lead of the game, but kicker Noah Raushenberg’s 51-yard field goal attempt was blocked by Dante Stills.

The Bears forced overtime with the score tied at 14-14 when Brewer hit Josh Fleeks with a 34-yard touchdown pass with 1:19 left in the fourth quarter.

Both teams traded touchdown passes in the first overtime, with West Virginia’s Jarret Doege finding Wheaton from 6 yards out, and Brewer hit tight end Ben Sims immediately for a 25-yard score on the first play of Baylor’s possession.

“I feel bad for our group,” Baylor coach Dave Aranda said. “Going back to the beginning of the week, the energy, I thought we had some good practices. You could feel some momentum building. Just to come up short and kind of be right there, and see the hurt on their faces, hurts me. A lot of lessons to be learned.”

WVU’s quarterback Doege completed 30 of 42 passes for 211 yards and was picked off twice. 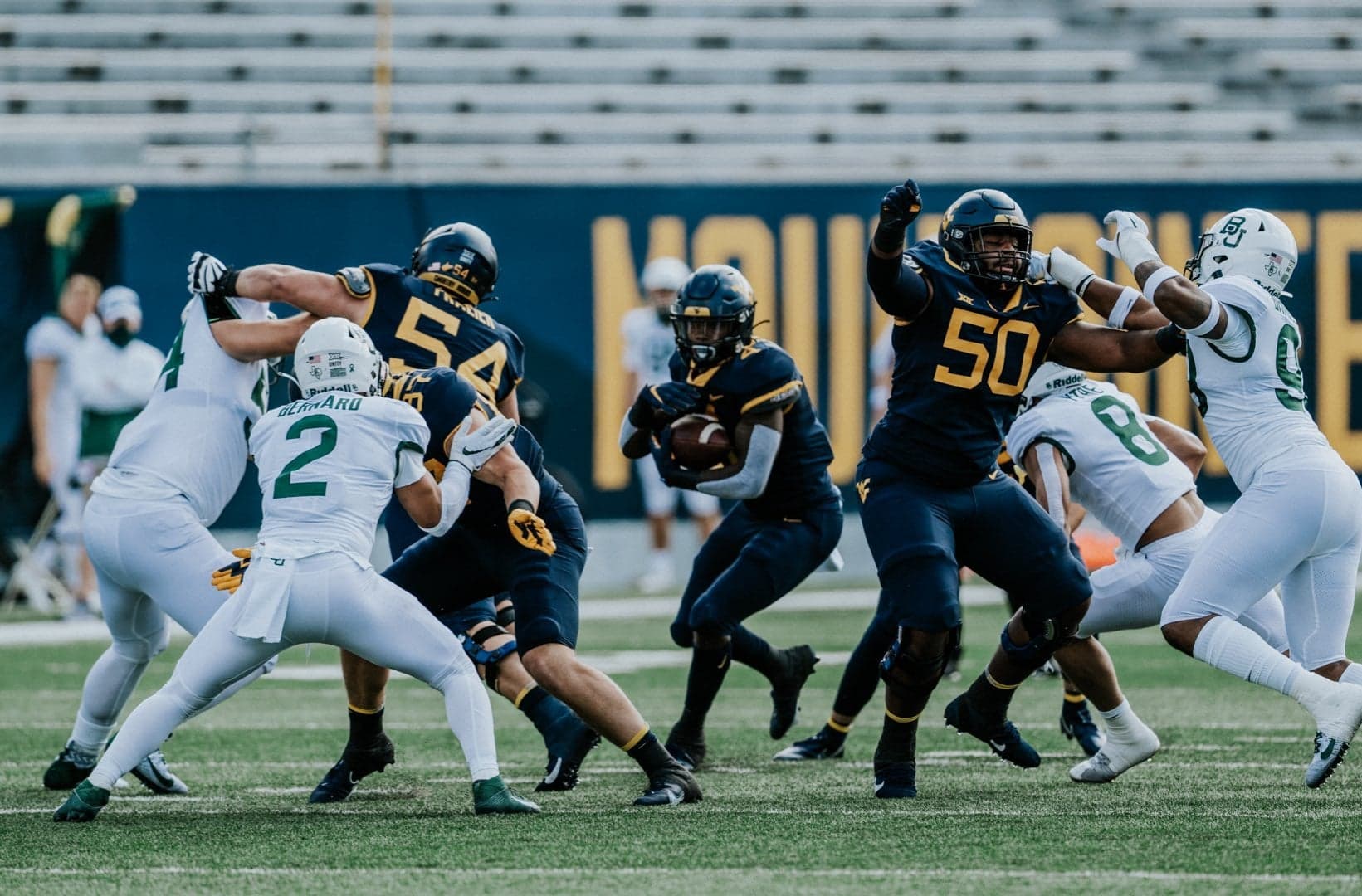 A double-overtime interception set up the game-winning touchdown run by Brown. The Mountaineers gave up a late touchdown in regulation, but improved their record to 2-1 with their first Big 12 victory of the season.

West Virginia’s defense harassed Baylor’s Charlie Brewer in the pocket all day. They sacked him six times, had 11 tackles for loss and forced two interceptions. Brewer threw three touchdown passes, but his interception in the second overtime proved costly.

WVU needed only five plays to score on their second-overtime possession with Leddie Brown covering the final 12 yards on three carries. Brown finished with 93 yards on the ground, falling short for three straight 100-yard games for the season.

“I love our group and we’ll get better from this,” Aranda said. “We’ll learn from this.”

Brewer was 23-of-38 for 229 yards and three touchdowns with two interceptions, but the Mountaineers kept the Bears’ strong ground game to just 27 net yards on 33 attempts.

After a bye, Baylor will host 17th-ranked Oklahoma State for Homecoming on Oct. 17 at McLane Stadium. The Cowboys (3-0, 2-0) are now the lone remaining unbeaten team in the Big 12, beating Kansas on the road, 47-7.