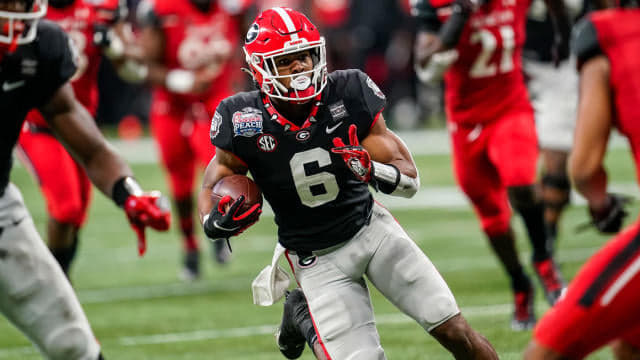 Atlanta, GA—When Jack Podlesny gets back to Athens trust and believe all of his meals going forward will be taken care of.

Georgia Kicker Jack Podlesny smashed a 53-yard field goal with three seconds left to lift the Bulldogs (8-2) to a 1-point lead over the Bearcats (9-1), and then Azeez Ojulari finished the Bearcats off with a safety on the final play for the 24-21 victory in the Chick-fil-A Peach Bowl game at Mercedes-Benz Stadium.

The Bulldogs trailed 21-10 in the fourth quarter, but in the second half they amped their defense and gave Cincinnati problems . JT Daniels rallied Georgia with his arm. Daniels finished with 392 yards passing with a TD and an interception.

Daniels, now 4-0 as UGA’s starter, orchestrated an 8-play, 44-yard drive to set up Podlesny’s field goal after the Bulldogs started at their own 20-yard line with 1:28 left on the clock.

The Bulldogs out-gained the Bearcats 449-307, but they had three empty trips inside the red zone and trailed 21-10 entering the fourth.

It was the Bulldogs’ 24th-straight bowl trip, the longest in the nation, and the New Year’s Six Bowl win assures Georgia of a fourth-straight Top 10 finish under head coach Kirby Smart.

Cincinnati quarterback Desmond Ridder was 24-of-37 passing for 206 yards and two touchdowns, but the Bulldogs defense sacked him 8 times and kept pressure on him all game long.

Azeez Ojulari had three sacks and two forced fumbles and was constantly in the Bearcats’ backfield causing havoc.

The Bearcats came out firing out on all cylinders in the second half when running back Jerome Ford took the hand-off up the gut for a 79-yard touchdown that put Cincy up 21-10. But couldn’t move the ball after that consistently to keep the Bulldogs off balance.

After forcing a punt and getting the ball at its own 20 with 90 seconds and no timeouts left, Daniels drove the Bulldogs down the field and set up a 54 yard field goal attempt for Jack Podlesny.

And Podlesny nailed it.