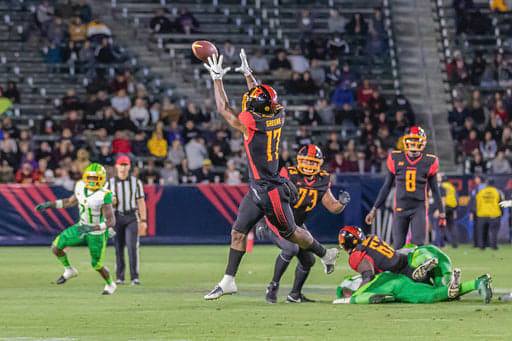 CARSON, Calif. — The Los Angeles Wildcats (2-3) came back from a 17-0 deficit against the Tampa Bay Vipers (1-4), jump-starting their offense in the second quarter onward to win 41-34 on Sunday, marking the highest-scoring game in XFL history.

A 20-point second quarter outburst set the tone for the Wildcats for the comeback victory at Dignity Health Sports Park.

Josh Johnson threw for 288 yards, four touchdowns, one interception, and a 107.2 passer rating. Johnson also surpassed the 1,000-yard mark and now has 1,076 yards. He is second in passing yardage behind Houston Roughnecks PJ Walker despite having only played four games.

The defense stiffened and came up with two big takeaways, including a touchdown on a fumble recovery, in the fourth quarter.

Tampa Bay nearly had a chance to tie near the end of the fourth quarter, but the Wildcats returned a strip-sack for a touchdown to seal the game. Another late rally by the Vipers ended with a Wildcats interception.

The Wildcats trailed 17-0 in the second quarter until WR Jordan Smallwood was able to get free in the secondary. From second-and-14 from the LA 45, QB Josh Johnson connected with Smallwood for 54 yards up the sideline. Smallwood was brought down at the one-yard line. RB DuJuan Harris scored a rushing touchdown on the next play to polished off the Wildcats seven-play, 71-yard drive and got the score to 17-6.

Tampa Bay answered with a TD reception by WR Jay Tolliver and a one-point conversion to TE Dan Williams. The Wildcats trailed 24-6 at the two-minute warning mark.

After the two-minute warning, LA found their offense and scored 14 points in 77 seconds.

A nine-yard touchdown reception by TE De’Quan Hampton followed by a two-point conversion by RB Larry Rose and the Wildcats was starting to put things together on offense.

The next possession took only two plays to cover 56 yards. A 48-yard reception by WR Saeed Blacknall which set up an eight-yard TD strike to Brandon Barnes.

The Wildcat defense held the Vipers scoreless in the third quarter; they allowed just three first downs giving the offense an opportunity to take their first lead. With 1:42 remaining in the third Johnson found Tre McBride for the 11 yard TD catch.

The first play of the fourth quarter DT Reggie Howard snatched an interception which the offense turned into TD points with less than a minute expired in the quarter.

“We made some adjustments and it seemed to fire those guys up big time. I mean, look at that sideline. They are talking, they are energized and they’re playing hard as hell.” LA Wildcats head coach Winton Moss said.

An interception by safety Jack Tocho with 47 seconds remaining in the game secured the game for the Wildcats.

On the third quarter:

“I have to look at the tape, but we were just weren’t making the plays. I thought that they hit us with a couple of blitzes we hadn’t seen that caused the turnover and scored. That was a big part of it; that turnover was a big part of it. I don’t want to put it on Taylor for them because it was a coverage we had seen on that blitz and prepared for that. They got momentum and started making plays.”Head Coach and General Manager Marc Trestman said.