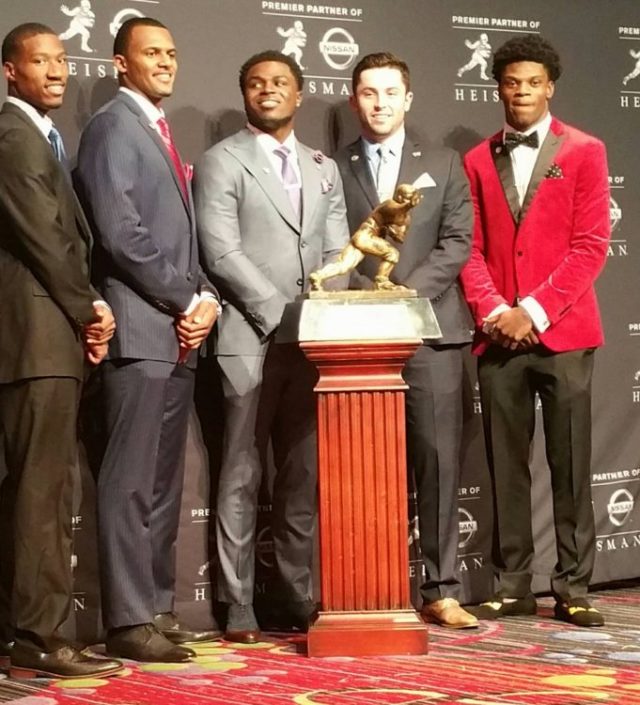 Marriott Marquis: “It’s definitely why he won the Heisman because of his commitment to learning and becoming a quarterback and understanding it. His ability to really picture plays is something that he really worked on.” Louisville Coach Bobby Petrino.

Jackson humbly thanked God, teammates, coaches, and his mother Saturday night at the Marriott Marquis in New York. During his Heisman’s acceptance speech, Lamar was very emotional as he begun to talk about his mother and her impact upon his life and athletic career.

Jackson won the award with 2,144 points; Deshaun Watson finished second with 1,524. Oklahoma quarterback Baker Mayfield (361 points), Sooners running back Dede Westbrook (209 points) and Michigan multiple dimension threat Jabrill Peppers (208 points) placed third through fifth, respectively. Jackson received 79.5 percent of possible points received, the fifth-highest total in the past 50 seasons of Heisman voting, while the gap between Watson and Mayfield was the largest in the past 70 years.Lamar became the youngest player to win the Heisman at 19 years, 337 days just five days younger than 2013 winner Jameis Winston of Florida State and he is just the fourth sophomore to take home the trophy. He joins Johnny Manziel of Texas A & M (2012) as the only Heisman winners to throw for 3,000 yards and rush for 1,000 yards in a season.

Lamar Jackson is the 82nd winner of the Heisman Memorial Trophy and the first Louisville Cardinal player to be honor with this prestigious award.

Jackson, the 6’3, 205-pounder, a Pompano Beach, Florida native, not only represents the first ever winner from Louisville but also the Cardinal’s first ever finalist. Lamar is the 4

th sophomore to receive the award joining the Tim Tebrow, Sam Bradford, and Mark Ingram. Jackson is also the 36th quarterback to win the Heisman.

Jackson completed 220 of his 382 passes for 3, 390 yards and rushed 1, 538 yards on 234 attempts for a total offense of 4, 928 yards, 2nd all-time for a Heisman winner to Ty Detmer of BYU in 1990 with 5, 022 yards. Lamar, leading the nation’s number one scoring offense, broke an ACC record with 51 total touchdowns and became the first player in FBS history with 3, 300 yards and 1500 yards. This season’s 51 total touchdowns ties Jackson for 3rd all time for a Heisman winner with Tim Tebrow. Lamar also took home ACC Player of the Year and Offensive Player of the Year honors and was named an ACC first team offensive selection. Jackson also won the Maxwell Award, which is given to the college player of the year.

Lamar Jackson will be officially honored by the Heisman committee and will be joined by family and friends in attendance at the 82nd annual Heisman Memorial Dinner Gala Monday evening on December 12, 2016 at the Marriott Marquis in New York.

As Jackson prepare for his last game of the 2016 season, he will take his rightful place among his fellow past Heisman Trophy winners. He will join the likes of Archie Griffin (Ohio State), Barry Sanders (Oklahoma State), Roger Staubach (The Naval Academy), and Herschel Walker (University of Georgia) as Heisman Trophy winners.