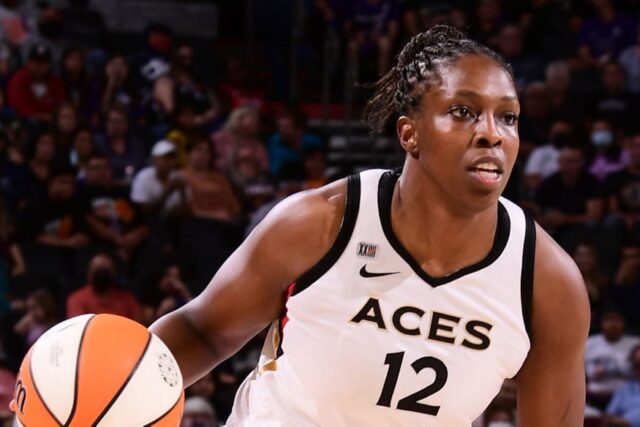 PHOENIX – Tonight’s game was a special game for the Phoenix Mercury with a true home game during the semi-finals. Due to prior events scheduled at the Footprints Center, each of the Mercury home playoff games were played at the local colleges Grand Canyon University and Arizona State University respectively.

It’s been a long time coming for the Mercury to be this far in the playoff scene and with the NBA game time change, it gives the ladies an opportunity to play on their own home court for game 4 and possibly close out the series.

October 6, 2021 will forever be a memorable day for Phoenix fans as they will got double header games of basketball for the first time in history. The Phoenix Suns played the Los Angeles Lakers at 3pm PST (Preseason) and Phoenix Mercury had the Las Vegas Aces at 7pm PST for game 4 (Mercury 2-1) in the best of 5 semifinal games.

The Aces had something to prove in game 4. They went into the game with an all or nothing mindset as they face elimination in Phoenix. From tip off through the first 2.5 minutes, it didn’t look like the mindset had changed as the Mercury dominated the floor with a opening 11-2 lead.

The Mercury relied a lot on their bench as they were playing without Sophie Cunningham who was injured in game three due to a calf strain and Kia Nurse hurt her knee just 39 seconds into the game. Nurse went up on a fast break for a layup but had her shot blocked by A’ja Wilson planted awkwardly on her right leg. She left the game as she was able to limp off on her own and returned only to support her team fully clothed in the third quarter.

Mercury coach Sandy Brondello said in the post game interview, “I think that threw them for a big punch. I think it showed how important Kia Nurse is for us.”

Diana Taurasi had three fouls going into halftime. She got the 3rd with two seconds which helped the Aces take a 49-46 lead into the break.

Las Vegas rallied right past the Mercury in the third quarter with a 24-0 run. When asked what was the mindset during the post game interview, both head coaches and players all were in amazement about the run. Both guard Kelsey Plum and forward A’ja Wilson stated it was an attitude adjustment for them.

The Aces was just too much for the Mercury and close them out in the fourth quarter to the tune of 93-76 for the final.

Plum stated “For us to get beat the way we did the previous two games, it’s humbling. You have to look at what can I do better as an individual, what can I do to help the team and I’m really proud everyone just bought in tonight.” And she did just that, ending with 20 points and six assists.

The Aces took this game personally and had to get back to playing basketball they are best known for. There sole focus is a spot in the WNBA Finals at home on Friday.

Chelsea Gray led the Aces with 22 points while A’ja Wilson chipped in 15 points with 12 rebounds and Riquana Williams added to the win with 17 points. One thing for sure, is when Williams and Gray are hot, they are a difficult team to beat.

“That’s how we play basketball”, Aces coach Bill Laimbeer said as he predicted his Aces would play their best in Game 4.

Brianna Turner is a key component to the Phoenix Mercury success and hope to win their next title since 2014. Game three Turner was the high scorer for both teams with her career high 23 points, 17 rebounds and 2 blocks in her 31 minutes of play against the Aces.

“You knew they were going to respond and today we knew that coming”, Taurasi said. We just didn’t do the things done that you need to beat a really good team.”

The road to the 2021 WNBA Finals looks great for Chicago after they beat No. 1 Connecticut Sun in 3-1. Chicago’s Candace Parker scored 17 points, nine rebounds, seven assists, and two steals to help the Sky advance to the finals for the second time in franchise history. They also had players from the Chicago Bulls there to support them courtside.

The GOAT – Diana Taurasi is still recovering from an ankle injury as she set a personal playoff career high of 37 points during game in Vegas. In game 4,Taurasi played 29 minutes, scoring 14 points with 3 rebounds and 3 assists. During the post game interview she stated that there were not many calls for them to end up on the line, but it is what it is – she is not going to get upset about the calls or lack thereof. They didn’t bring their best in the game and have some work to do in game five.