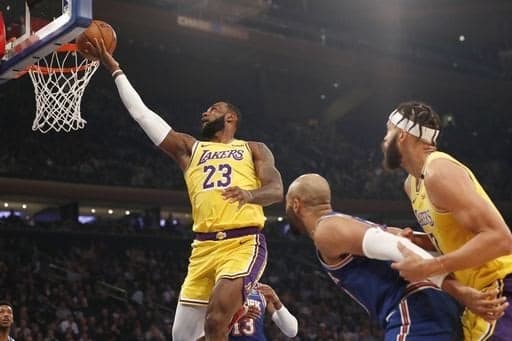 NEW YORK — It is something about the Garden that Lebron James feels right at home and gives the NY fans something to cheer about.

On Wednesday, when the Lakers were back in New York, James took care of business at Madison Square Garden, leading the Lakers to a 100-92 win with 21 points, 19 of which came in the first half. James also had five assists and a season-high 5 steals.

Anthony Davis led the Lakers with 28 points in his second game back after a five-game absence, after the Western Conference leaders were handed their worst loss of the season Monday in his return.

”Still getting my wind back. Just trying to find a rhythm again,” Davis said. ”I’m not trying to go out there and get my shots or force anything. Felt good tonight to get to the free-throw line and see the ball go in the rim.”

James took only six shots in the second half but Davis scored 17 points after the break to help Los Angeles close out the game.

”I was more of a facilitator in the second half,” James said. ”I wanted to get AD going. He looked a little out of rhythm in the first half. So it was a point of emphasis for me in the third quarter and the fourth quarter to get him going. And that was the difference.”

When the Lakers last visited the Knickobockers at Madison Square Garden, the game came down to the wire.

With 22.3 seconds left in the game, Emmanuel Mudiay made the free throw that gave the Knicks a one-point lead. Out of timeouts, the Lakers inbounded the ball to James, who was being picked up full-court by Mario Hezonja.

James dribbled the ball out near midcourt with the shot clock winding down, James attacked the basket and rocked the rim.

James has 33,599 points, 44 back of Bryant. That leaves him in good shape to catch the former Lakers star Saturday at Philadelphia, where the five-time NBA champion was born.

The Lakers led by six after three quarters then opened the fourth with Howard’s dunk, a 3-pointer by Rajon Rondo and a basket by Kyle Kuzma to extend it to 83-70.

Marcus Morris scored 20 points and Damyean Dotson had 17 points for New York. The Knicks couldn’t come up with timely shots to threaten the Lakers in the fourth quarter.

”In the first half we weren’t making them uncomfortable enough or taking the fight to them enough,” Lakers coach Frank Vogel said. ”It was a tie score and we knew there was another gear we had to get to.”

New York hung around and was within six again late but the Lakers prevailed despite only two baskets, both by Davis, in the final four minutes.