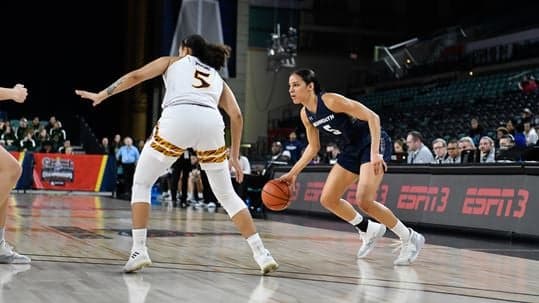 Atlantic City, N.J. — Sierra Green scored 26 points, 2 rebounds and 2 assists to carry Monmouth to a 69-60 win over Iona in the opening game of the Metro Atlantic Athletic Conference Tournament on Tuesday night at the Jim Whelan Boardwalk Hall.

Iona had a problem in the first half guarding senior guard Sierra Green who torched them from downtown going (3-3) beyond the arc and shooting 4-5 overall from the field. She ended with 11 points going into the half.

Green drained her first six three-point attempts and went 6-for-6 from the stripe in the fourth quarter.

Guard Morgan Rachu for Iona had 17 points and 12 rebounds in the loss.

Monmouth advances to the MAAC Quarterfinals for the seventh consecutive season and will face No. 2 Marist tomorrow at 3:30 PM.

“We’ve relied on our defense for the entire year. The difference today is that we made our free throws down the stretch. It gives you that separation and confidence to close it out. Iona is a gritty team and we knew it was going to be a 40-minute game. It doesn’t matter what the score was, that team is not going to quit. It took the entire game for us to get this win, and I’m glad we did.”  – Monmouth head coach Jody Craig said.