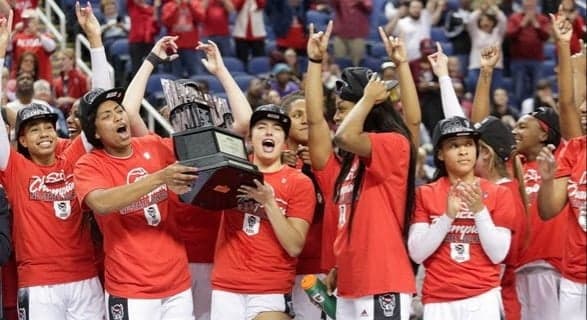 Freshman wing Jakia Brown-Turner finished with 14 points and seven rebounds, while freshman guard Jada Boyd was the other Wolfpack player in double figures with 10 points.

“I don’t think that’s ever applied to us,” said Konig, who scored 18 points for the game. “You know, we have had a lot of success over at least my four years here and I’m hoping that we can continue on that and we have a lot of fantastic teams at NC State. As long as you’re willing to support them and have confidence in them they’re going to show up for you.”
Nicki Ekhomu and Woolfolk scored 17 points each for a Florida State team that nearly won its first ACC Tournament. The Seminoles received just seven points combined from the rest of the team.
It was a game that had 57 attempts from downtown (34 from Florida State and 23 from NC State), there was an abundance of shots that change the complexity of the contest. The last two came from Seminole forward Kiah Gillespie and Konig.
The Wolfpack got their offense rolling and built a big halftime lead in its semifinal against the Eagles that Moore was able to rest Elissa Cunane and teammate Kayla Jones for most of the second half — keeping them fresh and healthy for the final.

Sunday when Florida State ran off 10 unanswered points to take a five-point lead with 3:45 remaining left in the game but the Wolfpack made some adjustments on defense and was able to hit shots deep from the perimeter to close the game out.

Kiah Gillespie scored a game-high 25 points and pulled in nine boards in the lost, drained a 3-pointer with 4:44 to go on the clock gave FSU a one-point lead. Konig responded by tying the game at 63 on a three with 2:28 to go in the game.

The Wolfpack eventually took the lead on free throws but a missed free throw by Cunane with 21.5 seconds to go kept it a one-possession game. It wasn’t until Seminoles guard Nausia Woolfolk missed a long trey with 14 seconds remaining that NC State could breathe some fresh air. Cunane made two free throws shortly after to ice the game for the Pack.