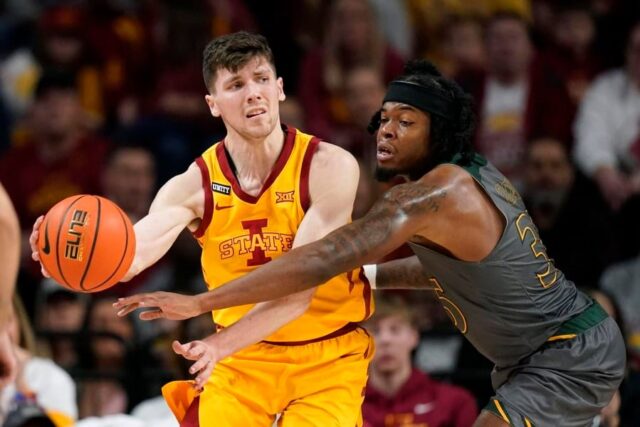 Ames, Iowa —The last few weeks, the Cyclones have been playing their best brand of basketball and piling on wins to boot.

Izaiah Brockington and Caleb Grill combined for 37 points and No. 11 Iowa State to beat Southeastern Louisiana for a 77-54 victory Sunday to remain unbeaten.

Both teams were shaky early in the contest. The Cyclones committed four turnovers in the first four minutes of play. Southeastern made just three of its first 16 shots, including 1 for 10 from 3-point range.

Grill gave the Cyclones the spark they needed offensively knocking down threes all over the court. He scored a team-high 20 points with 18 of those from downtown on 7-for-11 shooting from the floor.

Iowa State defense held Southeast Louisiana to 37% from the floor and 27% from beyond the arc. The Cyclones forced 12 turnovers and kept the Lions out of the lanes for easy buckets.

Brockington chipped in 17 points on 7-for-12 shooting. He also grabbed 11 boards.

“I thought we did a good job playing for each other,” said Grill, who entered averaging 6.1 points on the season.

Grill’s shots from downtown helped Iowa State build a steady lead 39-24 at the break. The Cyclones made eight of 10 shots while extending their margin to 53-34 with less than nine minutes to play in the game.

“There’s nothing better than when you see someone put in that work and have success,” Iowa State coach T.J. Otzelberger said. “I just want guys to trust the work they put in, and fortunately Caleb did that.

The Lions (4-8) shot poorly throughout the game, including eight of 29 from 3-point range. Gus Okafor led Southeastern Louisiana with 13 points and snatched eight rebounds.

“We really preached that if we speed them up and force them to play faster, it would force them to take shots they’re not used to taking,” Otzelberger said.

The Cyclones were holding opponents to 57.1 points per game heading into Sunday and have now held eight opponents to 60 points or fewer.