Orlando, FL—Northwestern have been on a mission all season long and Friday bowl game was a business trip they had to finish.

The No.14 ranked Northwestern Wildcats beat Auburn 35-19 to claim the 2021 Vrbo Citrus Bowl title and its fourth consecutive bowl victory in the last five seasons in Orlando.

Peyton Ramsey set the tone for the game immediately, going 5-for-5 for 66 yards on the opening touchdown possession. He hooked up with tight end John Raine twice and wide receiver Riley Lees for a 14-yard gain on third down before finding wide receiver Ramaud Chiaokhiao-Bowman for 35 yards and the score. NU put up another score before the end of the first quarter with a second touchdown pass from Peyton Ramsey.

“We wouldn’t be where we are at today without Peyton Ramsey,” NU coach Pat Fitzgerald said. “Great leader. Great teammate. You can tell that he’s from a coaching family, and he’s like having a coach out there on the field, and he’s really so unflappable.”

The game was won on the defensive for the Wildcats.Where Northwestern won the game on third down. The Tigers converted only two of its 13 third-down attempts, and they were 0-for-6 on third down when they needed four yards or fewer. Defensive coordinator Mike Hankwitz blitzed Auburn quarterback Bo Nix to force him to make quick decisions, and too often, he couldn’t process the information fast enough. Hankwitz, who coached his final game and had a long successful career went out with a bang. 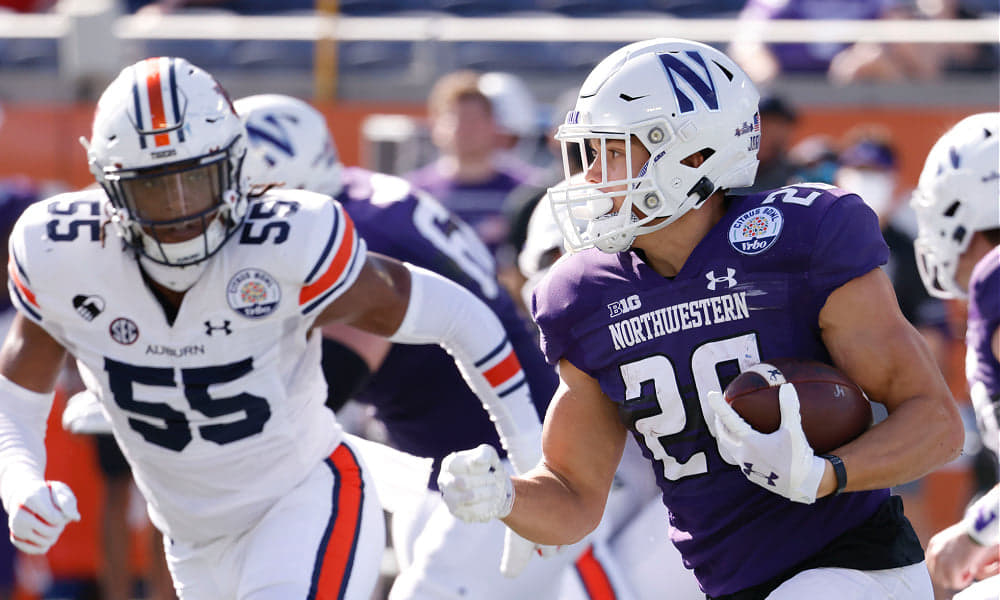 Ramsey had his best game as a Wildcat. He set a season-high mark with 291 yards passing, and his three touchdown tosses tied the three he threw in a road win over Purdue earlier this season. Ramsey, also had 50 yards on the ground for the day, including a 30-yard touchdown burst in the third quarter that helped NU establish some type of control of the game after Auburn had cut the lead to 14-13.

“He stayed poised, he was gritty and when he needed to make plays, even with his feet, he was decisive and that scramble touchdown there at the end was huge,” Fitz said of his quarterback postgame.

The Wildcats was helped out by running back Cam Porter, who ran for 98 yards for the game. He sealed the game with a fourth-quarter touchdown to make it 35-19 and NU never looked back.

Nix was 25-42 for 292 yards passing for the Tigers and led the team with 32 yards rushing, but it wasn’t enough to keep Auburn in the game.

Auburn finished with 19 points and 361 yards of offense, six of those points and 75 of the yards came late in the fourth when the game had already been decided, and the Wildcats was happy to let the clock expire.

“I think at some point, you have to make a decision for yourself,” Ramsey said about his future. “I am very high on some of those young guys…Those veteran guys, I can’t say enough about Ramaud, Riley and John and what they have meant to me and how special those guys are. You know, too early to make that call, but I’m really high on those young guys, and I think they are going to be really good players.”