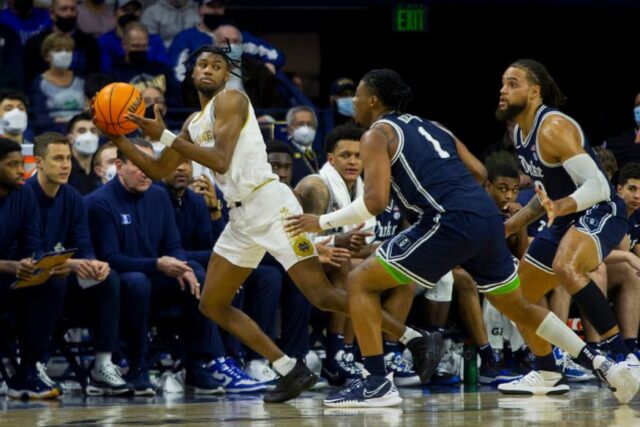 Both teams shot under 40 percent from the court in the game and combined to shoot six-for-37 (.162) from downtown.

Graduate student Paul Atkinson Jr. led Notre Dame with 14 points and nine rebounds. He was the only Irish player to finish the game in double figures.

The Irish started the game cold missing 13 of their first 15 shots to slump into a 18-10 hole. At one point in the half, both teams combined to miss 16 of 19 shots.

Atkinson Jr. got the Irish going with back-to-back buckets to trim Duke lead to 18-14 with just over four minutes left in the half. The Blue Devils responded with a nine-point spurt to end the half, the Irish would not score again for the rest of the period.

A pair of Atkinson dunks helped to keep the Irish close in the half, but Duke went on a 9-0 run to take a 27-14 halftime lead.

Duke won its fourth straight on Monday night to pull into a first-place tie with Miami atop the ACC standings, while Notre Dame, which entered the game 9-0 at home this season, saw its four-game winning streak end. 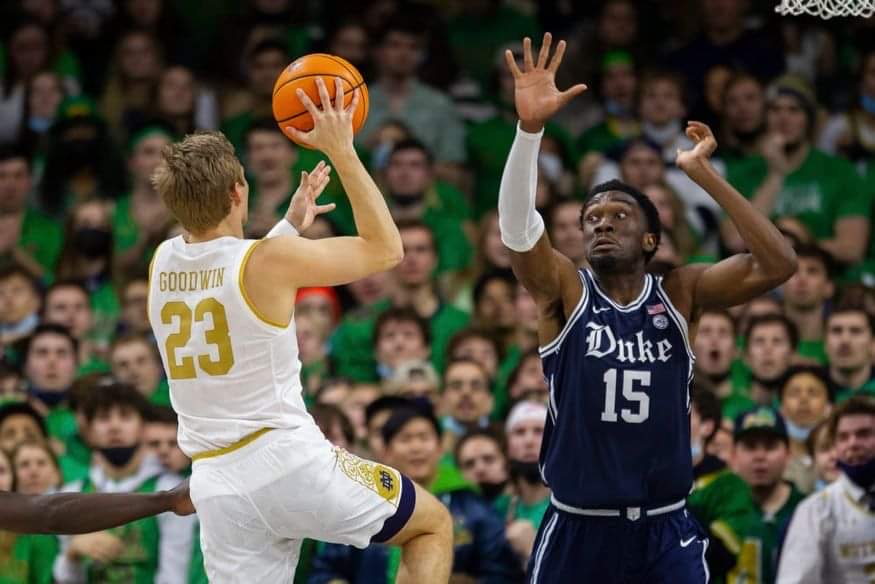 The game was the makeup of a Jan. 1 contest postponed due to health and safety protocols in the Blue Devils’ program. Notre Dame led just once at 2-0 and never led after that.

Senior Nate Laszewski became the third Notre Dame player this season to reach 1,000 points in a career, finishing the contest with four points and six rebounds. Notre Dame becomes the first program in the nation to have five 1,000-point scorers on their active roster – Prentiss Hubb, Paul Atkinson Jr., Laszewski, Dane Goodwin and Trey Wertz, Goodwin (20) and Wesley (17) both saw their double-digit game scoring streaks come to an end in today’s game.

The 43 points allowed marked the fewest Duke has given up to an ACC opponent since a 68-40 victory against Clemson on Jan. 8, 2013.

Irish lead scorers Blake Wesley and Dane Goodwin, who were each averaging 15 points or more this season, were held to six and zero points, respectively.

The Blue Devils wrap up their three-game road swing on Saturday night at North Carolina. The two historic programs are set to clash in the 256th installment of the Tobacco Road Rivalry at 6 p.m. on ESPN.

The Irish return to the road in ACC play at first-place Miami on Wednesday, February 2, 2022, at 7 p.m. ET on the Regional Sports Network package.