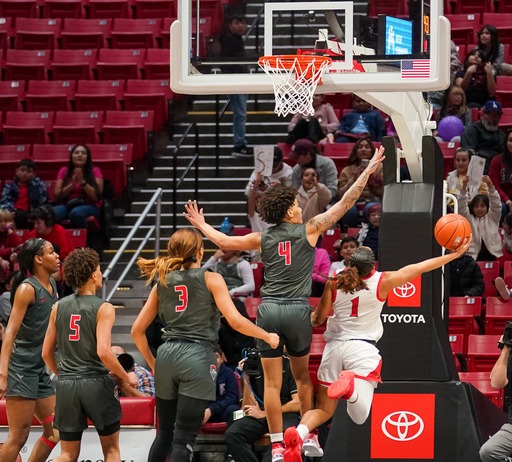 In the second half, San Diego State finished the contest on a 13-2 run and forced six turnovers in the game’s final seven minutes.

“I’m really proud of our team,” Head coach Stacie Terry-Hutson said after the game. “New Mexico is a good team that’s well-coached and they came out and threw the first punch and did some things that they hadn’t done a lot this season and took us out of what we wanted to do offensively. I’m proud of our staff and our kids, and we pivoted on our game plan and just locked down on the defensive end in the second half which helped us erase that deficit.”

The Lobos was stroking it from distance early, jumping out to an early 11-4 lead in the opening minutes of the contest behind two LaTascya Duff three-pointers and a layup by Paula Reus. The Aztecs got it to 11-10, but an Aniyah Augmon three-pointer kept the Lobos ahead, SDSU pulled within one point at 14-13, Reus answered with a deep three pointer from the corner. Following two free SDSU free throws that trim the lead to two points with 2:02 left in the quarter, Augmon closed it out with two layups for UNM for a 21-15 score at the end of the first.

LaTora Duff hit a three-pointer with 1:38 on the clock gave the final Lobo points and the Aztecs scored the final points of the quarter with 1:16 left and UNM took a 38-29 lead into the break.

Four Lobos finished in double figures, led by a double-double effort from Shaiquel McGruder with 15 points and a game-high 10 rebounds. LaTascya Duff made five three-pointers and finished with a team-high 16 points, LaTora Duff poured in 11 points to go with a game-high five assists and Paula Reus chipped in 10 points.

The Aztecs tied the game at 48 but couldn’t take the lead and saw the Lobos up the lead back to seven points at 59-52.

The Lobos led for most of Thursday’s game against San Diego State, but lost the lead late partly because of the 15 turnovers in the game.

SDSU used a run to even the score at 59 with 4:26 remaining in the contest. LaTora put the Lobos back in the lead at 61-59 with a layup with 4:02 remaining on the clock. The Aztecs ramped it up on defense and SDSU went on another run, this time a 9-0 one to finally take the lead at 63-61 with 2:57 left, SDSU first’s lead since they were up 4-3 in the opening minutes.

While the Lobos started out hot from deep, the Aztecs wouldn’t hit their first three until midway through the third quarter.

“I was really impressed with our focus,” Terry-Hutson said. ”It wasn’t our game plan to switch everything and we found that we needed to because they are such a good three-point shooting team. They don’t need a lot of space, so we needed to switch them up and we all locked in and helped take away some of those easy looks that they weren’t getting in the first half.”

This was the largest second half comeback by the Aztecs since March 11, 2019, which was also 13 points against New Mexico in the quarterfinals of the Mountain West Tournament.

The Aztecs play at Wyoming Saturday at 5 p.m. PT.

The Lobos return home to face Boise State on Saturday, Jan. 21 at 1 p.m.