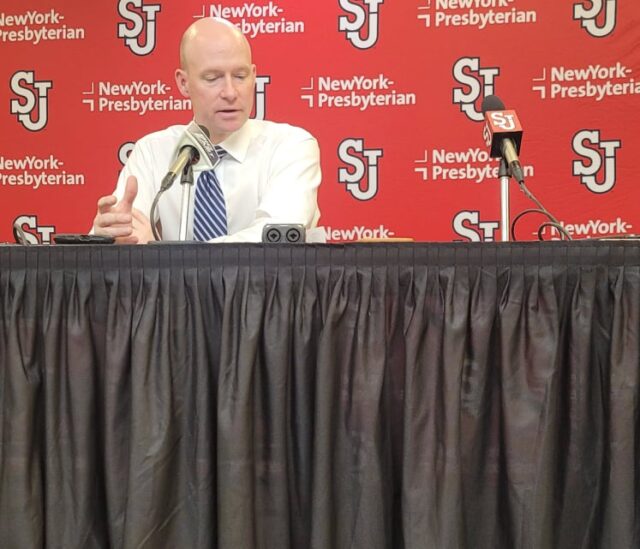 Madison Square Garden-The Johnnies (10-7, 2-4) are scheduled to play the Pirates twice in three days, playing at “The World’s Most Famous Arena” today then traveling to South Orange for another Big East showdown in Walsh Gym on Monday.

Meeting for the 107th time on Saturday, the two teams have played five days apart twice in their series history (1985 & 2021). The series began in 1909 and the programs have played every season since the 1963-64 campaign.

Defensive guru Myles Cale scored 21 points and Alexis Yetna chipped in 16 points with 15 rebounds. Kadary Richmond added 10 points, eight assists, and two steals to help the Pirates (12-5,3-4) beat St. John’s 66-60 after a two game skid at the Garden in front of a crowd of 6,692.

Cale locked up Julian Champagnie one-on-one for most of the contest, holding him to nine points on 3-of-14 shooting from the floor. It was the first time in 47 games that Champagnie failed to hit double figures in scoring.

Seton Hall have now won five of the last six contests. The Pirates also have won 12 of the last 16 games in the series dating back to 2014-15.

The Pirates and Johnnies went into the break tied 28-28 with Pirates Tray Jackson hitting a long three from the top of the key. Tyrese Samuel led Seton Hall with seven points.

“I think this was his best game. He always plays really well here. I think this was the best game he’s played because he played big, and was aggressive in getting to the rim. I also thought he did a phenomenal job on Julian Champagnie-Julian is one the best players in the league and to have him shoot the way did is a pretty big compliment.” Pirates coach Kevin Willard on Myles Cale.

The Red Storm turned the ball over 19 times and gave up 30 points in the paint. Samuel and Yetna proved to be too much for the Johnnies on the blocks. Also the Pirates had a 60-43 advantage on the glass.

In the opening minutes of the second half, the Pirates were able to get forward Jared Rhoden some open looks on the perimeter and he hit some big shots on the wings.

The games were full of runs by the Pirates and the Johnnies couldn’t get any closer than five points throughout the contest.

Aaron Wheeler scored 13 points for the game and was a problem for the Pirates on the wing but couldn’t get enough help to take down Seton Hall. The Johnnies got within four points with 46 seconds left. Dylan Addae-Wsu sunk a pair a few throws but missed shots down the stretch still healing from his achilles injury.

“I think in any game, you guys know that, when we don’t shoot the ball well, shooting 29% from the field, and then you get outrebounded, your chances of winning are pretty slim.” Johnnies coach Mike Anderson said.

St. John’s will travel to South Orange, to play Seton Hall on Monday, January 24 at 7 P.M.