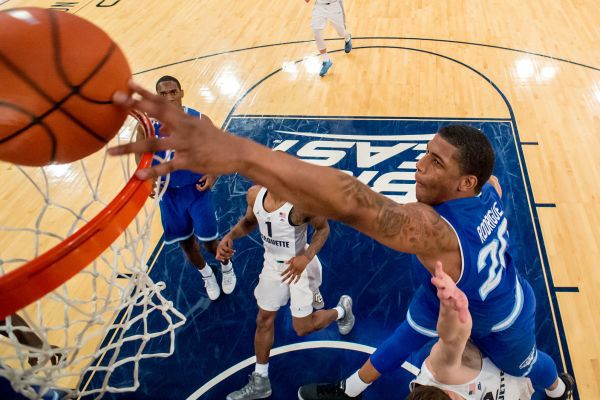 Madison Square Garden, NY. –Seton Hall played with a chip on their shoulders all season tired of hearing rumblings that there weren’t that good and they might not get out the quarterfinal round of the Big East Tournament.

The Pirates looked calm, poise, and confident in the preliminary shoot arounds. In front of a noisy crowd of 17, 234 #5 seed Seton Hall upended # 4 seed Marquette 82-76 at Madison Square Garden.

Marquette raced out to a 14-9 lead the Golden Eagles had their high-Low post game working and the perimeter shooting started to fall. But even with Golden Eagles runs the Pirates were braced for the challenge.

Seton Hall got rid of the pre-game jitters and started to put ball pressure on the perimeter making it very difficult for Marquette to get open looks. The paint area for the Golden Eagles started to shrink. The light bulb went off for the Pirates they started to slow down the pace got into their offensive sets they wanted. With the hot hands of Seton Hall Myles Powell (3-7) 8 points and Desi Rodriguez (3-7) 6 points, the Pirates were able to go into the half knotted at 35.

“I thought we had I think we had a six minute stretch where they didn’t score in the second half. I thought both teams were sloppy the beginning of the second half. But we were able to really defend. We made them take some tough 2s. We chase Rowsey off the line a little bit. He really hurt us. We were able to chase Howard off the line which really helped us.” Said Seton Hall Coach Kevin Williard.

2007-08 and Georgetown in 2009-10 since joining the conference. Marquette is 10-11 all-time in its 11 previous appearance in the event, but has yet to play in the championship game.

In the second half the Pirates raced to a 5-0 run to take a 51-42 lead. Madison Jones, Myles Powell, and Khadeen Carrington joined the shooting party in the paint. The Piratesscored 40 points on the blocks, which proved to be difference in the game.

The Pirates are in the semifinals for the 10th time overall and third time in the last four seasons. Next up for Seton Hall is the # 1 seed of the Big East Tournament the Villanova Wildcats. 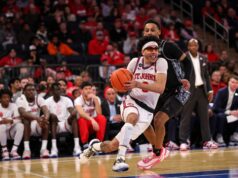