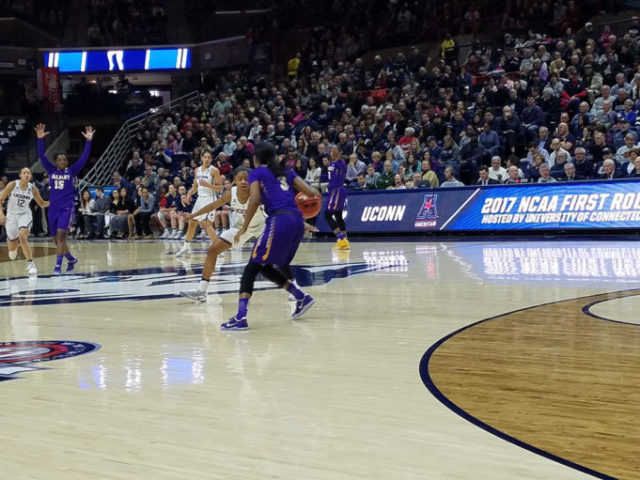 Storrs, Conn–The Great Danes was hoping they had the help of some four leaves cloversin the their shorts to defeat the Huskies in the opening round of the NCAA. Connecticut had their own good luck charms called Gabby Williams and Napheesa Collier.

Napheesa Collier 18 points, 7 rebounds and 16 points, 5 rebounds set the tone early in the half for the Huskies. The two help toppled # 16 seed Albany 116-55 at Gampel Pavilion. It was UConn 108th straight win and 25th straight in the NCAA Tournament.

With 2:10 played the Huskies were up 9-0 and pouring it on the Great Danes. Whatever hopes Albany had of dethroning the defending National Champions UConn quickly dispel any chance of an upset. UConn came out with full court pressure for the first six minutes of the game and forced 11 turnovers in the first half. Connecticut ‘s stifling defense caused Albany to shoot a dismal 44.4 percent in the first and 35.3 percent in the second.

Kia Nurse, who missed the last four games of the regular season with an ankle injury, scored 24 points. Nurse went 6-for-7 from 3-point range for the Huskies (33-0), who haven’t lost in the first round since 1993. Nurse played a solid 24 minutes for the Huskies and looked tournament ready.

“We didn’t play well in the first half we had too many defenses lapses. The long layoff hurt us a little but after we watch the film come Monday we will be more ready to play mentally and physically. I know all of us we will step it up and get it done. This is work so hard for in practice for this very moment.” Said UConn Gabby Williams.

Albany senior Imani Tate had 19 points and freshman Jessica Fequiere chipped in 16points to lead the Great Danes, which ends their storybook season at 21-12.

Albany, who upset Florida in the opening round of last year’s NCAA tournament, wasnever in this game. UConn jumped on them early and knocked them out in the paint area.

The Huskies opened each of the first three quarters with 9-0 spurts. Connecticut hit 62 percent of their shots and outscored Albany 52-18 on the blocks.

The real story of the game was Napheesa Collier scoring 24 points, jumpstarting UConn’s offense early giving the Huskies an dominate presence in the paint. Collier had 10 strong rebounds, converted 10 of 15 shots, with two assists, three blocks and three steals.

Collier’s teammates also crashed the party. Kia Nurse had 24 points and three assists. Gabby Williams capped of the night with 20 points, 10 rebounds, 6 assists and 5 steals. Williams was the catalyst on defense stopping all dribble penetration on the weak side for the Huskies.

UConn freshman guard Crystal Dangerfield is really coming along for the Huskies, she orchestrated the offense for long period of stretches ending the game with 16 points (6-10) shooting and 6 assists.

Going into the half UConn was shooting 50 percent from the field compared to the 35.3 percent of the Great Danes, which put them into a 58-32 deficit. Albany had no resolution for UConn high-lo action in the first-two quarters.

“We just play and see what other teams are going to give us each game. Pheese and Gabby were basically unstoppable in the paint and Kia stepped up really big for us, so we were just doing what we could to feed them.” Said UConn Katie Lou-Samuelson.

to 25-2. Their loss to Louisville in 1993 followed a loss to Providence in the Big East Tournament, was the last time the Huskies lost two consecutive straight games. UConn have since gone 882 games without back-to-back losses. This was their 37the straight NCAA Tournament wins at Gampel Pavilion. They now have an impressive 92-9 record as a No.1 seed.

The 116 points is tied for the most that UConn have put up in an NCAA Tournament game. Connecticut beat Hampton 116-45 in the first round of the 2000 tournament. UConnrecord for most points in a single game is 126, set against Providence in 126-48 win January of 1998.

“You want to send a message to the rest of the tournament and they did what they had to do. They played hard for 40 minutes. They’re a great team. They’re not going to sit there and just settle. You’re going to keep going hard.” Said Albany Imani Tate.