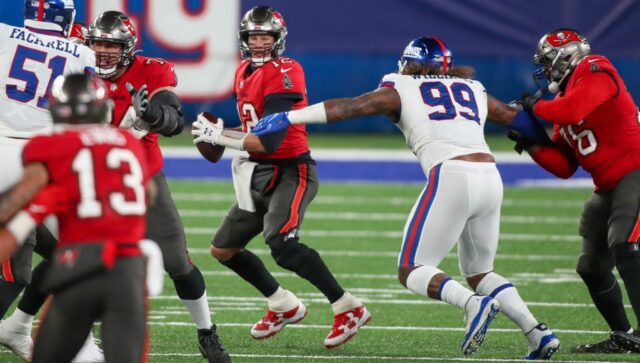 MetLife, Stadium—The NFL gods is still showing favor on “Tom the Terrific.” All Tom Brady does is win football games.

Brady threw two second half touchdown passes as the Tampa Bay Buccaneers rallied from an 11-point deficit to post a 25-23 victory over the New York Giants on Monday night at East Rutherford, New Jersey.

The Giants offense was rolling in their first offensive series. The drive ended with Jones hitting Dion Lewis’ on a sliding catch in the corner of the end zone on third down for a 7-3 l early lead.

The G-Men next scoring drive had a mixture of run and pass combination, featuring gains of 11 yards, a 12-yarder, a 14-yarder and a 17-yard run by running back Wayne Gallman. He finished the drive scoring from the 2 yard line and gave the Giants a 14-3 lead.
The Buccaneers trailing 14-3 in the first half found a way to regroup themselves on offense and on defense. On the defense side Tampa Bay mixed up the coverages and confused Daniels.

Tampa Bay had two second-half interceptions of Jones and coverted them into 10 points. Brady’s third quarter touchown pass to tightend Rob Gronkowski gave the Buccaneers their first lead. The Bucs, after a Giants field goal, re-gained the lead on Brady’s eight-yard touchdown pass to Mike Evans with 9:02 left.

Daniel Jones was 25-of-41 passing for 256 yards, two touchdowns and two interceptions for the Giants (1-7), who dropped to 1-3 at home. It was Daniels’ interceptions that cost the G-Men the game.

Giants’ secondary did a great job producing coverage sacks on Brady. But Brady is Brady, he managed to convert short passes for big gains and kept his composure in the pocket.

The Buccaneers (6-2) will be back in prime time in six days, when they play the New Orleans Saints (5-2) on “Sunday Night Football.” The Giants (1-7), meanwhile, will be on the road in Week 9 for an NFC East matchup with the Washington Football Team (2-5).