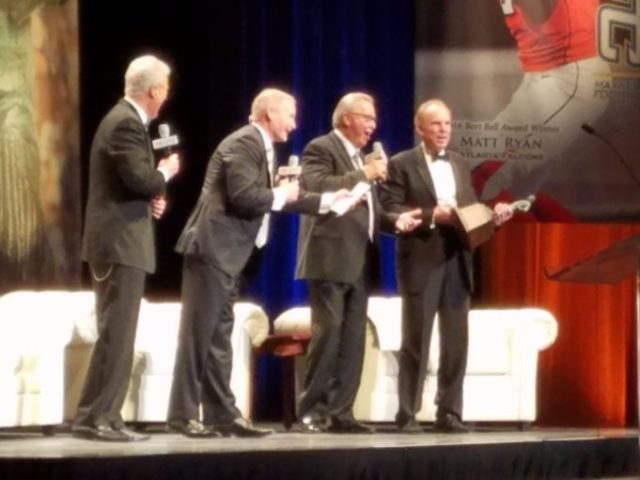 Every year in March, Atlantic City, New Jersey becomes the college football mecca of the world as current All Americans, alumni, NFL players and distinguished guests gather to pay tribute to high schools, colleges, and NFL finest. They enjoy a day filled with philanthropic work, recognition and celebration.

The Maxwell Football Club is an organization not only involved football but an active participant in the community yearly. One of the Maxwell’s core principles is helping young people to realize their potential as leaders.

The Maxwell Football Club is a founding member of the National College Football Awards Association. This organization (NCFAA) was founded in 1997 as a coalition of major collegiate football awards. The sole purpose of NCFAA is to protect, preserve, and enhance the integrity, influence, and prestige of college football’s various awards.

This weekend the Maxwell Club celebrates its 80th anniversary as the organization remains stalwart in perpetuating the name of the man known as “ Robert Tiny Maxwell” who was a football player, coach, and sportswriter.

The Maxwell Award is presented annually to the college football player judged by a panels of sportscasters, sportswriters, and National Collegiate Athletic Association head coaches and the membership of the Maxwell Club to be the best all-around in the country.

Roger Staubach (Legends Awards)-Was the recipient of the 14th annual Tropicana Legends Award, not for his football heroics and antics or being a shrewd businessman.

Roger lived a life of integrity, morals and modesty that warrants emulation.

James Conner (The Tom Brookshier Spirit Award)- He was diagnosed with stage 2 Hodgkin’s lymphoma, cancer of the lymphatic system but that didn’t stop him. In his last college season, he rushed for 1,092 and scored 20 touchdowns. He also joined some rare company in Pitt history books, ranking second all-time in rushing yards 3,733, total touchdowns and rushing TDS, trailing on Tony Dorsett in those categories.

Allen Wright (Innovation in Safety Award)- He is among the NFL’s longest tenured equipment managers, was a visionary who created a innovational helmet fitting protocol, which optimized the fit of every player’s helmet prior to each game. He stressed the importance of fit for helmets effectiveness and player safety and awareness.

Mitchell Meyers (Uplifting Athletes Award)- Was diagnosed with Hodgkin’s lymphoma right after the 2014 season. After 18 months away from the game, cleared prior to the beginning of practice for the 2016 season. Meyers went out to and earned a starting spot at defensive end and played the entire season. Meyers was the only one of five players to start all 12 games, finished with 28 tackles and for the third time in his career was a First Team Academic All-Big 12 selection.

James Franklin (Tri State Coach of the Year)-After all the chatter about Franklin being the right fit after getting shelled by Michigan, 49-10 and sitting at 2-2 in the 2016 season.

Franklin with his calm demeanor and his philosophies quiet the storm. The Lions proceeded to go on a nine-game winning streak. Penn State won their first Big Ten Conference Title since 2008. It was under Franklin leadership and his beliefs in his players that turned the Lions season around.

Lamar Jackson (Player Of The Year)- The Walter Camp Trophy is awarded to the outstanding player of the year who has exemplified the qualities of self-discipline, unselfish team play, desire to excel, mature judgment and respect for leadership. He must be a dedicated competitor who has made effective use of his athletic talent to enhance the great American game of college football.

The Maxwell Football Club Foundation membership continues today be an all-volunteer organization of more than 100, managed by area business professionals from all works of life, including doctors, lawyers, educators, accountants, legislators and industrialists, among others.