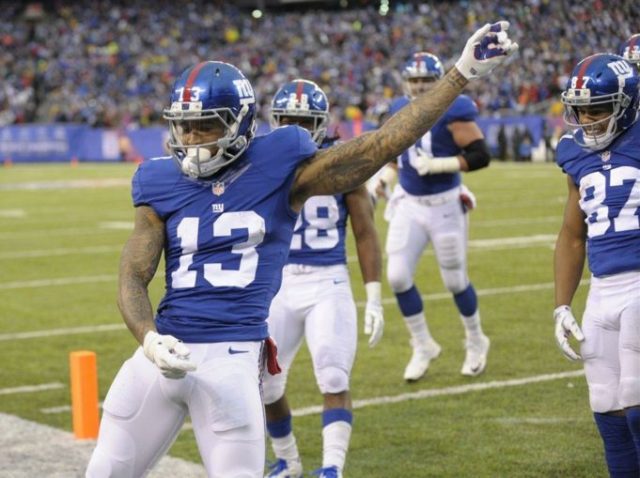 East Rutherford, NJ–There is an old adage you are strong as your weakest link and the Giants are strengthening all their links every game they play. The Giants are playing every game like it is a playoff game, you lose and you go home for good.

Beckham’s superman antics are almost expected, but the Detroit Lions still could not find a way to stop him at MetLife Stadium on Sunday.

The Lions put an excellent game plan for Eli Manning so they thought, Detroit kept constant pressure around the pocket to make Eli uncomfortable the whole entire game. After the Giants scored on a 75-yard opening drive, spearheaded by Victor Cruz 29 yards reception on a go route the Lions held G-Men to 3 points and 214 total yards over the next three quarters.

“It helps a lot starting fast. Obviously it keeps defenses off balance because they don’t know what’s coming to you. You want to make sure that you are keeping them off balance. Being that way today really helped, especially that opening drive, getting the ball in the end zone, running the ball well, getting the first down, that’s what we want to do.” Said Giants Receiver Victor Cruz.

The Lions had a coverage breakdown late in the fourth quarter, which left Beckham open for a 4-yard one handed catch for a touchdown. The acrobatic reception helped the Giants seal the 17-6 win, in front of a crowd of 79,434 at MetLife Stadium.

The Giants, who were ahead 10-6 at the time, had a little breathing room to hold off the Lions that had made a record eight fourth-quarter comebacks this season and was on a five-game winning streak entering Sunday contest.

The Giants are playing with a new kind of swagger after two crucial wins, against the Dallas Cowboys, who lead the N.F.C. East, and Detroit, teams they will likely face again in the playoffs. Although the offense still looks anemic, Beckham continues to display a knack for bailing the G-men out.

Although Lions quarterback Stafford was sacked only once and was hit just few times, he rarely looked comfortable in the pocket, completing 24 of 39 passes for 273 yards and no touchdowns.

“One of the best, if not the best. A bunch of really talented guys back there.” Stafford said of the Giants’ secondary.

After Lions speedy receiver Golden Tate broke open for a 67-yard reception into the red zone in the second quarter who was tackled by Dominique Rodgers-Cromartie, the Lions tried to play smash football with fullback Zach Zenner running the ball from the Giants’ 11. Giant’s crafty safety Leon Hall knocked the ball loose, and defensive end Giants’ Olivier Vernon recovered it for a touchback.

The next time the Lions were driving deep in Giants territory, early in the third quarter, Vernon Olivier and Johnathan Hankins sacked Matthew Stafford on a third down. A third trip by the Lions to the red zone in the fourth quarter ended with an interception by Dominique Rodgers-Cromartie to squash any hope for a Detroit comeback.

“They played well and we didn’t make enough plays. At the end of the day we had opportunities. Speaking about myself, early on, a ball I probably should have jumped up and got. We got in the red zone and let one go, we just have to bounce back. We are still in control of our own destiny, we just have to show up ready to work and try and get better.” Said Lions Receiver Golden Tate.

The return of offensive guard Justin Pugh from a knee injury helped open up massive holes for the Giants’ running backs. Manning, whose decision making lately with the ball begun to get under the skin of the Giants faithful, seemed to be in sync early in the game, completing his first 11 passes before finishing the half 14 of 16, for 127 yards. Manning finished the game having completed 20 of 28 passes for 201 yards and two touchdowns, with no interceptions.

“ It was big, especially coming out of last week struggling offensively. We were not as good as we wanted to be and for us to win the toss and for Coach McAdoo to say that we are going to take the ball and go down score, I think that is big for the offense, giving us some confidence and also for the defense. It is big knowing that we already got them a seven-point lead, so they can continue to go out there and play great football.” Said Quarterback Eli Manning.

The last few weeks the Giants have been playing lights out on defense and making offenses go the length of the football field to beat them.

“Our mindset is to stop the opponent; not let them score. That’s our mindset. We want to be the one of the top defenses in the league, but like I said, our mindset is to get off the field on third downs, make a play, get our offense the ball in scoring position, and go from there.” Said Giants Safety Landon Collins.