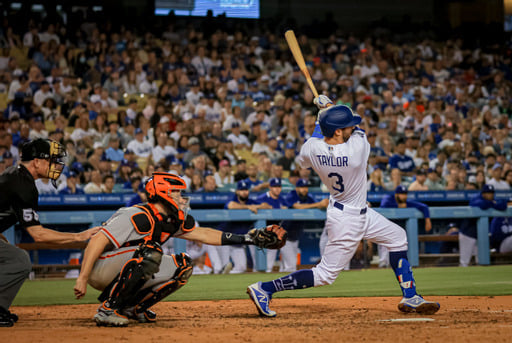 Los Angeles, CA — Without the big bats in the lineup for the Dodgers and the Giants bullpen has been so good in recent weeks, it didn’t look good on paper for Los Angeles.

Right-hander pitcher John Brebbia gave up a RBI double and a two-run home run in the sixth inning before closer Tyler Rogers walked the first two batters he faced on nine pitches in the ninth. The third batter Rogers faced, pinch-hitter Will Smith, came off the bench and blasted a shot that rocked the stadium.

Rogers entered the game with a 1.43 ERA and Smith’s home run was only the fifth hit against the right-hander in 89 2/3 career innings.

“I can’t wait to get Tyler Rogers back out on the mound,” manager Gabe Kapler said. “He’s been a warrior for us all year long, he’s been an elite reliever in this league and has thrown some of our biggest innings. Everybody has a hiccup. Obviously this is a disappointing loss, but I could not have more faith in Tyler Rogers.”

Tuesday marked the seventh time in franchise history the Giants have hit at least four home runs in the same game at Dodger Stadium and the first since September 4, 2010 when Buster Posey, Edgar Renteria, Pat Burrel, and Juan Uribe all powered the eventual World Series champions to a 5-4 win.

San Francisco couldn’t shut the door against the Dodgers club that pulled back within 1.0-game of the Giants’ lead in the National League West.

“I’m going to chalk tonight up as an outlier,” Rogers said. “Because I have to. Because I’m a baseball player and we’re playing tomorrow.”

The Dodgers tied the four-game set at one apiece and moved within one game of the first-place Giants despite missing Mookie Betts, Justin Turner, and Max Muncy. Betts was out of the lineup for the third straight day due to a hip injury, while Turner and Muncy eventually ended up leaving the game after each getting hit by a pitch.

“We have a lot of depth and guys that we can run out there,” Smith said. “With the lineup and taking good at-bats, that keeps us in the game and we can walk away with the win.”

Left fielder Alex Dickerson recorded the Frisco’s first home run of the night with a two-run blast off Dodgers flame thrower Darien Núñez before rookie Josiah Gray took the mound for his major league debut. A top Dodgers pitching prospect, Gray had seven strikeouts over the four innings stretch, but also gave up a solo homer to LaMonte Wade Jr., a solo home run to Thairo Estrada and a two-run home blast to Mike Yastrzemski.

In a game that featured seven home runs, the Dodgers trailed 6-1 in the fifth before coming back. Taylor — who had the third multi-homer game of his career — hit a solo shot off Alex Wood in the fifth and a two-run drive against John Brebbia during a three-run sixth.

Frisco starter Alex Wood gave up a double and a home run to Dodgers shortstop Chris Taylor before Taylor launched a two-run home run off Brebbia after picking up back-to-back strikeouts in the sixth.

“Brebbia started executing his slider, but he threw four straight batters first pitch sliders,” Kapler said. “Every once in awhile you get a good hitter like Chris Taylor who is going to sit on one.”

Taylor and Matt Beaty drew walks from Tyler Rogers (1-1) before Smith drove an 0-1 slider into the stands in left-center for the third walk-off homer and first pitch-hit shot of his career.

Rogers, who leads San Francisco with 44 appearances this season, works more often than most other major league relievers by design. The organization believes his command is at its best when he’s pitching on a frequent basis and Tuesday’s appearance was only his second within the last eight days.

“That was huge for us. This is a huge series. We stuck with it and came back and found a way to win a game. That’s our biggest win of the year so far,” said Chris Taylor, who hit two home runs while going 3 for 4 with three RBIs.