Brooklyn, NY—The NY Liberty looked out of sync in their first few games that because a lot of the players haven’t played together due to their commitment overseas,  but slowly you can see cohesiveness developing on the court.

Natasha Howard, who scored a season-high 27 points was the catalyst for the Libs.

New York outscored the Mystics 44-24 in the paint with Han Xu scoring 12 points on the blocks.

The Liberty never trailed in the second half and outscored the Mystics 36-22 over the second and third quarters.

“Finishing inside was big for us,” Liberty coach Sandy Brondello said. “Tasha was amazing for us. Han just keeps getting better and better. She’s grasping things quite well and she has such a soft touch.”

Washington struggled offensively outside of Natasha Cloud, who had 17 points, seven assists, and five boards. They shot just 36.9 percent from the hardwood, 27.6 percent from downtown and scored 11 points in both the second and third quarters.

“We had a lot of wide-open looks, we just missed them,” Brondello said. “We’re going to have nights like that. I like that we are taking a lot of 3s. Defense tonight won the game.”

Howard added nine rebounds and was 13 for 17 from the field for NY. Sabrina Ionescu had 10 points, nine assists, and seven boards.

Washington were missing All-Star Elena Delle Donne, who has been taking games off to rest her back which caused her to miss all of last season. Washington played in Minnesota on Tuesday and play again on Sunday at home.

“We have three games this week and we try to have her only play two right now,” Washington coach Mike Thibault said.

The Mystics led 24-20 after one quarter despite Howard scoring 12 points for the Liberty in the opening period. NY outscored the Mystics 20-11 in the second quarter to take a 40-35 lead into the break.

Four players off the bench played at least 16 minutes, and Walker-Kimbrough and Kennedy Burke both played more than 20. Thibault previously mentioned the schedule was wearing players down and that he would look for opportunities to shorten the starters’ minutes, but he said that wasn’t the case Thursday.

“Part of it was the starters weren’t playing very well,” Thibault said. “So for me, they didn’t deserve to be out there, some of them.”

New York extended the lead in the third quarter to 10 points behind the strong play of Howard, who had nine points in the period. Washington got within eight in the last frame, but could get no closer.

“Defense you could bring every single day,” said Mystics guard Shatori Walker-Kimbrough, who scored eight points off the bench. “Shots not falling, okay. But the defense and effort, you can always bring. Communication you can always bring. I don’t think we had that necessarily, at least not consistently for four quarters today.”

Despite being listed as probable for the game, DiDi Richards missed her 14th game of the season because of a right hamstring injury. She went through warmups but wasn’t ready to go. 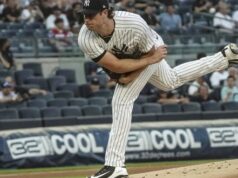 Gerrit Cole Gets His Mojo Back Against The Tampa Bay Rays