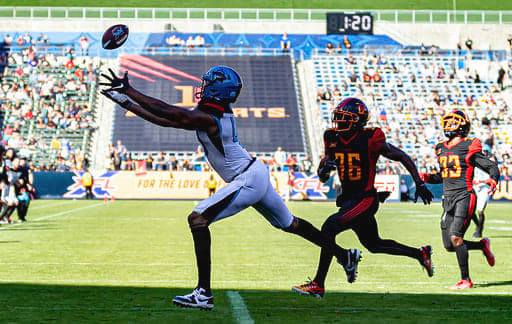 Carson, CA–The Dallas Renegades earned their first win of the season by scoring three touchdowns in the fourth quarter to beat the Los Angeles Wildcats 25-18 at the Dignity Health Sports Park.

Dallas quarterback Landry Jones made his debut after a knee injury kept him sidelined. Jones completed 28 of 40 passes for 305 yards and threw one touchdown and two interceptions.

Running back Cameron Artis-Payne is making a name for the Renegades, ran for 99 yards and two touchdowns on 14 carries. He also caught five passes for 32 yards and had a one-point conversion averaging 7.1 yards per carry.

The game was knotted at 3 at halftime, and the Renegades had a 6-3 lead in the fourth quarter before the Wildcats. finally reached the end zone with a 6-yard touchdown rope from Josh Johnson to Nelson Spruce. From there on, Dallas settled down on offense. The Renegades scored two touchdowns quickly, Cameron Artis-Payne on a 21-yard run and Landry Jones on a 3-yard pass to Donald Parham. Los Angeles struck back on one play as Johnson hit Spruce on a post for a touchdown, but their defense was unable to come up with the stop they needed. Dallas got the ball back and Artis-Payne broke free to paydirt to secure Dallas’s first victory of the season.

Los Angeles quarterback Josh Johnson made his XFL debut and completed 19 of 35 passes for 201 yards and two touchdowns. LA converted the first successful three-point conversion in the first two weeks of the XFL season.

“It’s not a secret, I didn’t play well today,” said Landry, who threw two interceptions. “The thing I’m most proud of are those scrambles. I couldn’t believe it.”

The Renegades will look to carry forward their momentum at the 1-1 Seattle Dragons next Saturday, while the Wildcats will seek their first victory at the 2-0 D.C. Defenders next Sunday.