Trojans Tre White poured in 16 points on 6-of-9 shooting, Kobe Johnson chipped in 14 points, five assists and three steals to lead the way.

USC started the game on fire, scoring the first 14 points of the game before a deep three from San Antonio put Cal State on the board. The Trojans extended its lead to 17 points, 22-5, halfway through the half. But Fullerton didn’t lay down, they used an 11-2 run fueled by back-to-back treys from Latrell Wrightsell Jr. to get within eight points, 24-16.

Both teams traded baskets throughout the remainder of the half, Harris completed a three-point play and Lee made a pair of bunnies to get the score to 29-21 for USC at halftime but got no closer.

Fullerton (4-5) shot just 27.6% (8 of29) in the first half but the Trojans scored just one point during a stretch of five-plus minutes and the Titans used a 16-5 spurt to trim the lead to single digits but ran out gas in the second. 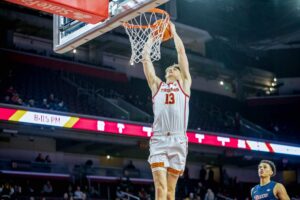 USC Trojans scored the first five points of the second half before a pull-up jumper on the right wing from Harris which brought the score to 33-23 for the Trojans. Wrightsell Jr. hit a 3-pointer off a hand-off from Lee, but a 7-0 Trojan spurt then gave USC a 42-26 lead.

Wrightsell Jr., the only Fullerton play to score in double figures, scored 17 points and was problem in the first half.

The Trojans extended its lead to 20 points, 48-28, before Max Jones laid it back off the glass. USC led by as many as 23 before a 10-0 Titan run capped by a Wrightsell Jr. driving layup brought Fullerton within 13, 57-44, with 3:22 left in the game. Victor Panov and Grayson Carper each drained treys in the wanning minutes to seal the win.