Cincinnati, OH —Every week Cincinnati has been playing with a huge chip on their shoulders and vying for respect every week.

Desmond Ridder threw for 327 yards and three touchdowns and ran for another score to help No. 7 Cincinnati beat East Carolina 55-17 on Friday night.

The Bearcats (7-0, 5-0 American Athletic) extended its school-record home winning streak to 19 games, the fourth-longest streak among FBS schools, and now in the conversation for a real shot of a College Football Playoff berth.

Ridder has been playing lights out the last few weeks and has accounted for 17 touchdowns in the past four games, including nine rushing TDs.

“Once plays break down and I see a hole, I just go,” Ridder said. “The offensive line has done a great job. The preparation has been good.”

The Bearcats had second-and-goal at the ECU 3, but lost a fumble at the 5 yard line. A few plays later, Cincy linebacker Jarell White returned an interception 26 yards for a score.

After punting on three of its first four possessions, the Pirates got the offense rolling and (1-6, 1-5) drove 58 yards in three plays, trimming the score to 14-7 on Keaton Mitchell’s 18-yard run.

After torching the Bearcats for 535 yards last season in the air, Holton Ahlers threw for 87 yards Friday with three picks. He was sacked four times for the game.

UC pushed its lead to 49-10 when the drive resulted in a touchdown. ECU scored a touchdown with 17 seconds left in the game to make it 49-17, and pushing and shoving between the two teams followed.

“There was definitely a different feel than last year,” Bearcats coach Luke Fickell said. “There was only one time he had an opportunity to scramble around. I give the front guys a lot of credit to keep him inside the pocket.”

Up by 32-point lead, UC faked a punt that resulted in a first down on a 29-yard run by Joel Dublanko to the ECU 43 yard line.

Fickell said the fake was not called from the sideline and he apologized to head coach Mike Houston after the game. “We would not want to do it in that situation,” Fickell said. With 17 seconds remaining, UC could have taken a knee, but instead handed off to Cameron Young who burst through the pack for a 75-yard run to cap the scoring. Fickell and Houston had a in depth conversation following the game. “I will leave what was said between us,” Houston said. 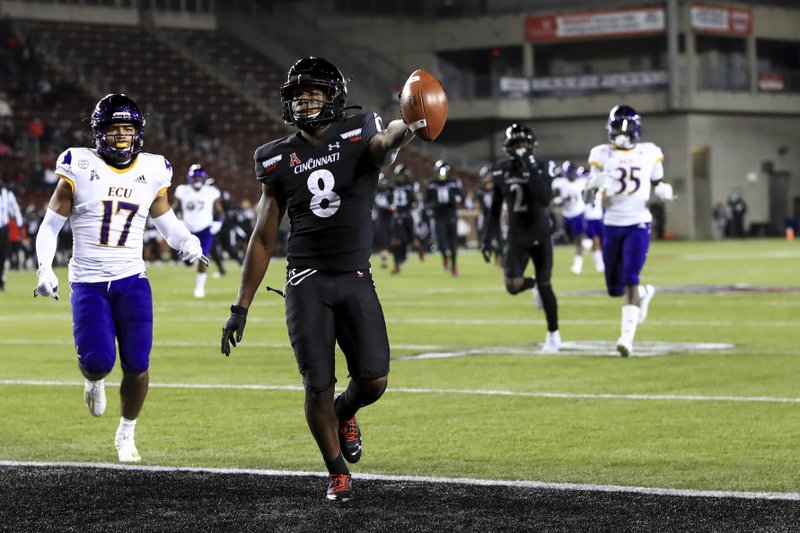 ECU had 293 total yards on Friday, more than 100 yards below its season average.

“The defense had an edge, a chip on their shoulder,” said James Wiggins, the senior cornerback who had five tackles and his first interception of the season.

UC set the tone on offense and got off to a fast start with Ridder’s 33-yard touchdown pass to Michael Young to cap a 79-yard drive on their opening possession.

The Bearcats never looked back after their opening drive. Ridder made sure of that the offense was operating on all four cylinders.

“Well, the way this one’s going it wouldn’t surprise me if they tried to squeeze a couple more plays out of this after that fake punt,”Analyst Andre Ware said when ECU got the ball back with 10 seconds remaining.

Cincinnati: At Central Florida on Nov. 21.