MetLife—The last few days the NY Giants lost games due to the offense turning the ball late in the ballgame. But every week the defense have been a formidable force of late.

New York Giants beat the Washington Football Team on Sunday, 23-20, after an Alex Smith-led comeback in the second half came up a little short.

Smith entered the game after Kyle Allen was carted off the field in the first half with what appeared to be a ankle injury. Washington drops to 2-6 with the loss, while the G-Men improves to 2-7 in the NFC East Conference.

Late in the first quarter, wide receiver Isaiah Wright muffed a punt that gave the Giants the ball at the Washington 16-yard line. Four plays later, Wayne Gallman plowed across the goal line for a short touchdown run to give New York a 10-0 lead.

With Washington trailing ­10-0, Allen dropped back to pass on first down from the New York 31-yard line. Giants safety Jabrill Peppers came on a blitz from the edge. After being upended by Washington running back Antonio Gibson, Peppers whipped around his right leg and made contact with Allen’s left leg, which twisted funny as he fell to the turf. Peppers was flagged for unnecessary roughness.

Smith replaced the injured Allen. Smith struggled early completing 9 of 17 passes for 37 yards while being sacked six times. Washington made some adjustments on offense and had the offense in sync in the second offense. Smith came back from a 20-3 halftime deficit, beginning with a touchdown drive on the opening possession of the third quarter. In the fourth quarter, Smith hit with Terry McLaurin for his first touchdown pass in 728 days, a 68-yard catch-and-run that pulled Washington within three points.

Smith completed 24 of 32 passes for 325 yards, his most since 2017, but he also threw three interceptions. Two of those picks came with Washington driving for the potential tying or go-ahead score in the final three minutes of the game. 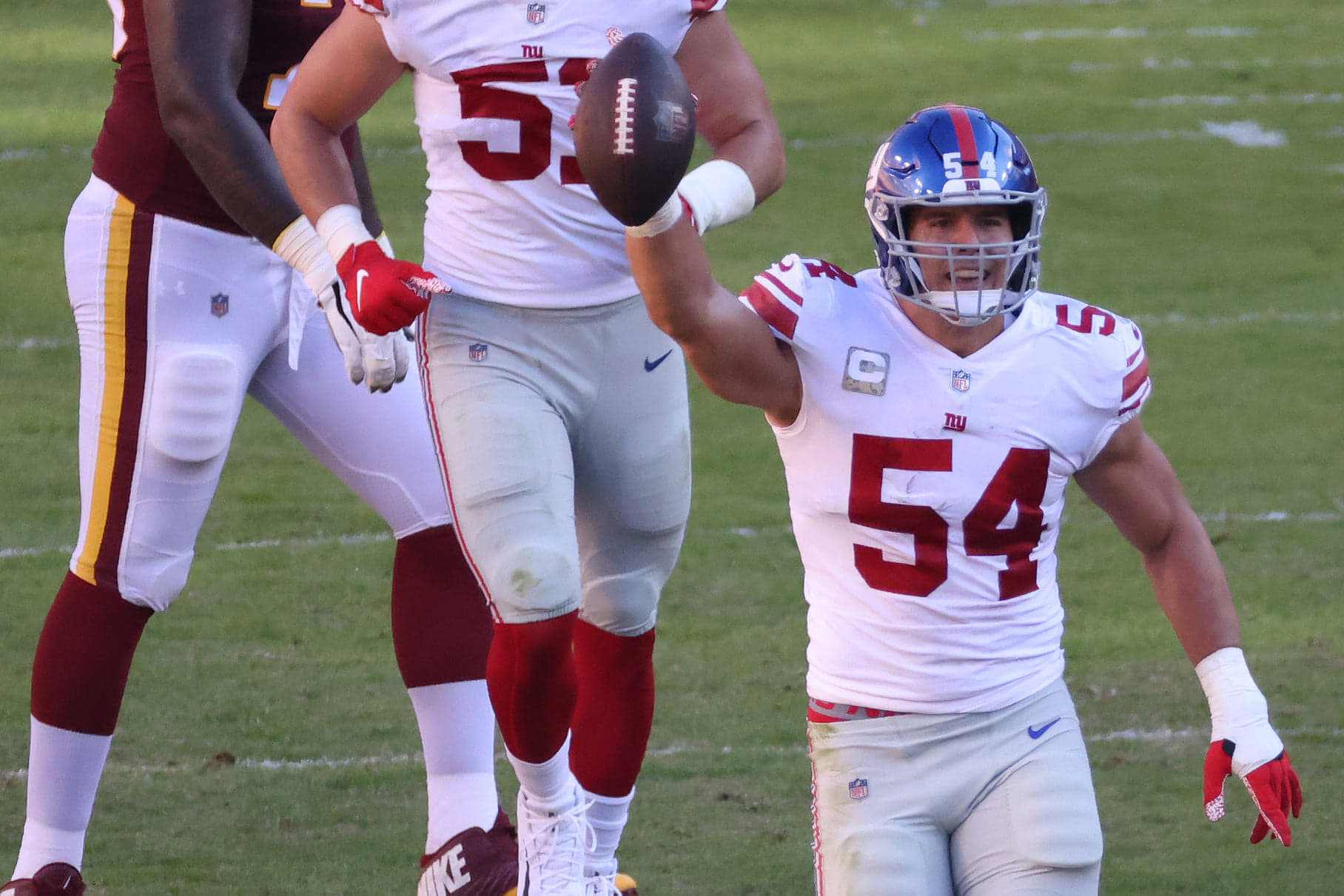 Blake Martinez finished the game with 10 total tackles (three solo), two passes defended, and an interception for the Giants.

The G-Men swept the season series for the second year in a row and won their fifth consecutive game against Washington. That is the Giants longest winning streak against their division foes since they won five in a row from 2013-15

Washington McLaurin had seven catches for 115 yards, while Cam Sims had 110 yards on three receptions.

The Giants improved to 1-4 on the road this season and finished 1-2 in NFC East road games. Washington had won its first two division home games, against Philadelphia and Dallas.

NY were outscored in the second half, 17-3. It was the second time this season they did not score an offensive touchdown in the third and fourth quarters. The first time was in the first victory against Washington, when linebacker Tae Crowder scored on a 43-yard fumble return. Prior to that, the Giants’ last game without a second-half offensive touchdown was on Sept. 29, 2019 against Washington. Safety Jabrill Peppers scored on a 32-yard interception return to seal the win.

The Giants rushed for a season-high 166 yards, their fourth consecutive game with more than 100 yards on the ground and their highest total since they ran for 206 yards on Dec. 22, 2019 in their previous game in Washington.

Washington’s five turnovers and the defense’s inability to get takeaways against the turnover-prone Jones ultimately were the difference of the game.

The Giants defense stepped up on Sunday, causing four turnovers against Washington (a fifth on special teams). Three of them were interceptions against Alex Smith, who replaced Kyle Allen after he left in the first quarter with a ankle injury.

Quarterback Daniel Jones improved his record as a starter to 4-0 against Washington. He made the tough throws on the day and looked comfortable throwing the ball down the field.

Jones completed 23 of 34 passes for 212 yards, one touchdown – a 16-yarder to Evan Engram – and no interceptions for a season-high passer rating of 94.2. It was the second game this season in which he did not throw an interception (also at Dallas on Oct. 11).