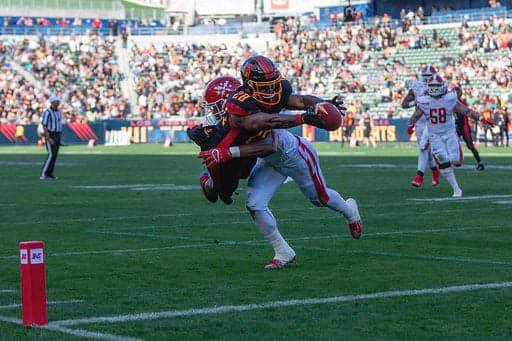 Los Angeles, CA–The Los Angeles Wildcats got their first win on Sunday over the D.C. Defenders, 39-9, in the final game of Week 3 of the XFL season at Dignity Health Sports Park.

LA celebrated the win in the final moments of the contest by dumping the Gatorade bucket on their coach, Winston Moss.

The Wildcats put those other two games behind them and came out airing out the football in the first series. QB Josh Johnson led them on a five-play, 71-yard drive that ended with a 40-yard dart touchdown reception by wide-out Tre McBride.

McBride was giving corners a problem all game long had five receptions for 109 yards and two touchdowns. He averaged 21.8 yards per reception for the day.

In the second start of his XFL season, Johnson posted a near-perfect passer rating of 148. He finished the game 18-of-25 for 278 yards and three touchdowns. Johnson has amassed 474 yards, five touchdowns, and zero interceptions through two games. His play has been stellar calling the signals.

RB Martez Carter scored the only other receiving touchdown of the game in the third quarter. The Wildcats used Carter’s versatility on the ground and in the air. For the game, Carter had three receptions for 41 yards and 11 carries for 34 yards. Off those 34 yards, he scored two rushing touchdowns.

On the defensive side, the Wildcats threw everything at the Defenders. The Wildcats had four interceptions — one by CB Mike Stevens and CB Arrion Springs. Jack Tocho had two interceptions and a fumble recovery off of an erroneous D.C. punt by Hunter Niswander in the third quarter.

It wasn’t a perfect game for the Wildcats but it was a perfect execution of their game plan to win.