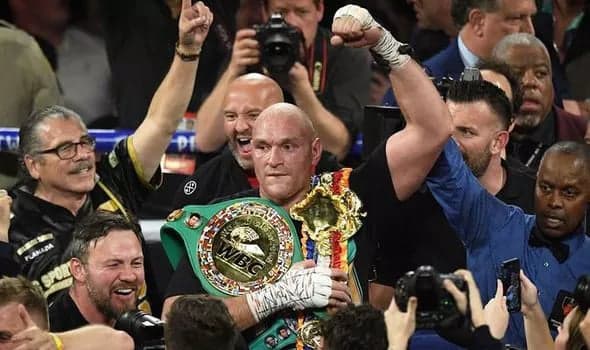 Las Vegas, NV–Britain’s Tyson Fury beat Deontay Wilder via 7th round TKO in their rematch on Saturday night at the MGM Grand in Las Vegas.

Fury (30-1, 21 KO) — who dropped Deontay Wilder twice Saturday in this widely anticipated rematch — became the WBC heavyweight champion again. It was the first loss for Wilder, who is now 42-1-1 with 41 knockouts. Their first fight on Dec. 1, 2018, was a controversial draw, allowing Wilder to retain his crown.

“The king has returned to his throne,” said Fury, who fought to a draw with Wilder in their first fight.

The fight was stopped because Wilder had shaky legs for most of the fight and was bleeding from his left ear. His corner threw in the towel as a safety measure.

During the 7th round, Fury was even seen licking Wilder’s neck area, where some of the blood was.

The loss marks the first of Wilder’s professional career, making him 42-1-1.

The two fighters could be in line for a third fight after Wilder recovers, or Fury might want to fight Anthony Joshua, who is regarded as one of the best heavyweights in the world.

It wasn’t pretty but it’s hard not to come away impressed by Fury’s flight plan against the favorite Wilder.

The rematch was billed as one of the biggest heavyweight title fights since Lennox Lewis defeated Mike Tyson nearly two decades ago.

Referee Kenny Bayless ended the bout at 1:39 of the seventh round after it was clear Wilder was taking a beating, with blood seen pouring from one of his ears.

The rematch drew a sellout crowd and was expected to set records for live gate receipts and do well as a pay-per-view broadcast. Both fighters were guaranteed $5 million but could see compensation as high as $40 million, according to AP.